Rumor: Collin Sexton is the only untouchable player on Cavs’ roster Just recently, it was revealed that the Cleveland Cavaliers did not budge when the Atlanta Hawks offered them a chance to move up from the No. 8 spot to the No. 3 spot in last month’s NBA Draft. The Cavs were so high on Collin Sexton that they did not feel the need to let go of their original draft position.

Of course, the Cavs also were not enamored of the idea of absorbing Kent Bazemore’s salary, which was part of the proposed deal, but the point is that Cleveland was determined to draft Sexton regardless of the team’s place in the draft order.

That high degree of devotion to Sexton by the Cavs has been reinforced again, this time by ESPN’s Brian Windhorst, who believes that the Cavs rookie is the only player on Cleveland’s current roster whom the team is going to keep for sure (h/t ESPN Cleveland).

Windhorst: I think the Cavs would trade Kevin Love and Kyle Korver but aren’t out there peppering teams for trade offers. I don’t think the Cavs want to trade them, its just that they aren’t untouchable. The only untouchable is Collin Sexton.

LeBron James’ decision to leave Cleveland for the Los Angeles Lakers this summer has left the Cavs’ with an unclear future. Trading Kevin Love and Kyle Korver for assets would signal a rebuild in Cleveland, but, as mentioned by Windhorst, it seems that the Cavs are not that aggressive shopping the two players. That reluctant stance could change at the trade deadline next February, which will mostly depend on how well the Cavs perform in the first half of the regular season.

As for Collin Sexton, the Cavs obviously want him pinned down in Cleveland. The rookie has been impressive so far in the Summer League, and if his fantastic stint in the tournament is any indication of his future in the NBA, it’s wise on the part of Cleveland to keep the former Auburn Crimson Tide in The Land. 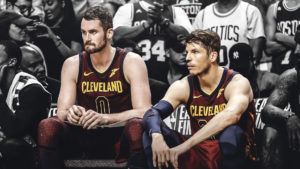