RUMORS: Cavs’ Collin Sexton not viewed as a starting-caliber guard around the NBA

The Cleveland Cavaliers gave Collin Sexton the keys to their offense when they drafted him eighth overall in 2018. While the 21-year-old speedster has given them a nice offensive lift in his first two seasons, a lot of people around the league believe he is better off as a bench player rather than a full-time starting point guard for the Cavs.

ESPN’s Brian Windhorst recently revealed this fact in an appearance on the Wine and Gold Talk Podcast with co-hosts Chris Fedor and Hayden Grove.

“When I talk to people in the NBA about Collin Sexton, they think he’s a bench player. They think if he’s your first guard off the bench, you’ve got a really good team. But that’s the kind of role he should be in,” the NBA insider shared, as relayed by FanSided.

The Cavs badly needed a PG following Kyrie Irving’s exit in 2017 and the failed experiment with veterans Derrick Rose and Isaiah Thomas. They selected the 6-foot-1 University of Alabama standout, who actually surprised a lot of pundits with his ability to get to the rim in his rookie year.

A year later, the Cavs tried to mimic the Portland Trail Blazers’ duo of Damian Lillard and CJ McCollum by pairing Sexton with another high-scoring guard Darius Garland. That backcourt produced mixed results in the 2019-20 campaign, as they struggled defensively against bigger opponents.

Collin Sexton, meanwhile, actually upped his game in his sophomore year, notching a team-best 20.8 points on an efficient 47.2 percent clip from the field and 38.0 percent from downtown in 65 games. The 2019 All-Rookie Second Team member, however, doesn’t really offer much outside of his scoring abilities. His limited playmaking abilities have been problematic for the Cavs offense, as he averaged just 3.0 assists, along with 3.1 rebounds and 1.0 steal in 33 minutes a night.

At best, Sexton seems like the perfect instant offense off the bench, and the Cavs would be better off seeking a true playmaker. Sexton’s game does resemble respected vets like Lou Williams and Jamal Crawford. If he’s willing to embrace a reserve role, maybe a Sixth Man of The Year Award plum might be in his future. 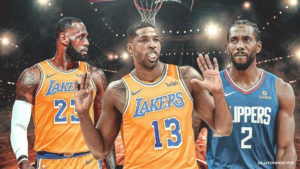