RUMOR: Cleveland willing to take on salary for this season and next, but not beyond The Cleveland Cavaliers figure to be one of the more active teams in the lead-up to the Feb. 7 trade deadline, possessing numerous veterans whom they could move. One such veteran is big man Tristan Thompson, who has another year remaining on his deal with the Cavaliers after this season.

The Cavs may have to take on some salary beyond this year in order to trade Thompson, and they are just fine doing that as long as such salary doesn’t extend into the 2021-22 season, according to Brian Windhorst of ESPN. That could mean that the Houston Rockets could represent a potential landing spot for Thompson, as they have the contract of Brandon Knight to match Thompson’s. Knight’s deal runs through next season.

Of course, the idea for the Cavaliers will be to shed as much money as possible while also picking up assets along the way. Cleveland currently owns a record of 9-39 and is light years away from contending, so the focus right now should simply be for the Cavs to blow things up and start from scratch.

While taking on salary for next year isn’t the best course of action, it may be the Cavaliers’ only choice if they still want to receive anything of value for Thompson, who no longer has any real role on the team other than that of a veteran leader. Thompson is averaging 11.5 points and 11.1 rebounds per game so far this season in 35 games.

Right now, Cleveland is really bereft of young talent outside of rookie point guard Collin Sexton, so getting back a young player — such as Rockets big man Marquese Chriss, for example — should be a point of emphasis in any Thompson trade. 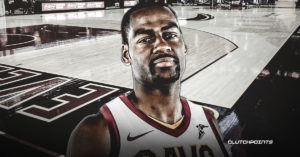