Cavs looking to add more young talent in the offseason, could trade for more picks The Cleveland Cavaliers have two first-round picks in this year’s NBA Draft, and the Cavs will be able to use those to add young, talented players to their team. Yet, it seems they will try to add more. According to Sam Amico of AmicoHoops.com, the Cavs might make some trades that will allow them to get at least another first-rounder.

“According to several opposing GMs, Altman and the Cavs have made it clear — they intend to secure more young talent this offseason. The best way to do that is through the draft. Today, they own the Nos. 5 and 26 overall selections, and that’s it. The draft is June 20.

So how do you get more picks? Well, by offering a little something in return. For instance, if you’re Altman, you may tell an opposing GM that you will give him exiled shooting guard J.R. Smith and take back a “bad” contract in return — provided their is a pick involved.”

A lot of teams are looking to unload bad contracts, one of which is the Miami Heat, who own the 15th overall pick.

The Heat are trying to unload the contracts of Dion Waiters and Ryan Anderson, meaning that if the Cavs want to get their pick, they will have to agree to absorb the contracts of one of those guys.

Apparently, that’s something that the Cavs are open to doing, according to Amico.

“Still, they have made it clear they’re just fine with that. As one opposing GM told Amico Hoops, “As difficult as it can be for ownership, it’s easier to shed a bad contract (with a buyout, etc.) than find young talent who can be a major part of things for a long time.””

The Cavaliers are being patient with their rebuild, which is obviously the right thing to do for a team that’s trying to become a contender once again. This is most probably going to be a long process, but the Cavs are fine with it. 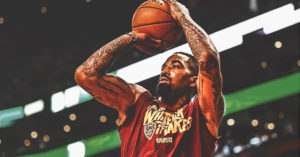 JUST IN: Cavs have unique flexibility with JR Smith contract, can explore many options
Related TopicsCavs