The void left by LeBron James on the Cleveland Cavaliers’ roster can’t be filled in by one player. It requires a collective effort from those who are left behind and the new additions. Among the pieces the Cavs are looking to help them mitigate the impact of James’ loss is free agent guard Treveon Graham, according to David Aldridge of NBA.com.

Cavaliers had a group in this morning to see workout of UFA @TreBall21, per league sources. Cleveland has strong interest; Minnesota in as well. Hornets did not give Graham a QO in June, making him unrestricted. Good 3 and D wing potential.

Graham went undrafted in the 2015 NBA Draft but later made it to the big league after getting signed by the Charlotte Hornets in 2016. In two seasons for the Hornets, Graham averaged just 4.3 points, 1.6 rebounds, 0.7 assists, and13.8 minutes in 90 games, including three stints in the starting lineup.

The 24-year-old former VCU Ram could see an increased amount of playing time in Cleveland should the Cavs sign him. The defending Eastern Conference champions could use some addition to their shooting guard depth as well with J.R. Smith as the only real shooting guard currently on the team’s roster.

Treveon Graham can also provide the Cavs with additional firepower from downtown, as he is a career 43.8 percent 3-point shooter, knocking down 1.4 long-distance bombs out of 3.3 attempts per 36 minutes of action.

Graham’s best game last season came in the form of a 15-point “outburst” during a 115-110 road win over Phoenix back in February. 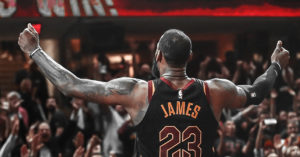