The Cleveland Cavaliers reportedly believe in JB Bickerstaff’s ability to develop the young talent on the Cavs’ roster, according to Chris Crouse of Heavy.

The Cavaliers believe in Bickerstaff’s ability to develop the young talent on the roster, multiple sources tell Heavy.com. The career arc of Kevin Porter Jr. is expected to be among Bickerstaff’s litmus tests as he embarks on his journey in Cleveland.

“There’s no one on the [Cavaliers] with real All-Star potential,” a former scout told Heavy.com. “If you told me one player will take his game to that level, I’d bet on Kevin Porter Jr.”

The Cavs currently have the worst record in the Eastern Conference. They are only 15-41 on the season and a ways away from playoff contention.

It’s safe to say the Cavs players are going to play harder for JB Bickerstaff than they did for John Beilein. Bickerstaff has a lot of experience with NBA players from his time with the Houston Rockets and Memphis Grizzlies.

New center Andre Drummond, meanwhile, has a player option for 2020-21 that he is expected to pick up. He’s only 26 and puts up great numbers, but he doesn’t really impact winning. 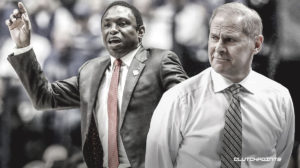