Cavs shooting guard Alec Burks is drawing interest from several teams around the NBA, including the Boston Celtics and Denver Nuggets.

Though the 2018-19 NBA season is well under way, there are still some teams around the league that are searching for ways to bolster their rosters. The Cavs, who are admittedly in a rebuild phase, are no exception.

It’s hard to imagine either Rodney Hood or Alec Burks being on the team following the Feb. 7 deadline. Both have smaller, expiring contracts. I’ve heard Burks is already drawing interest, with the Boston Celtics and injury-plagued Denver Nuggets among the teams mentioned.

The Cavs acquired Burks by way of a November trade with the Jazz — the same deal that sent Kyle Korver to Utah.

Burks has become one of Cleveland’s better options on the offensive end of the floor. In his eight appearances with the team this season (three starts), the former No. 12 overall pick has racked up averages of 11.3 points on 34.9 percent shooting from the field (29.4 percent from beyond the arc), 5.4 rebounds, 3.0 assists and 1.0 steal in 28.6 minutes per outing.

Whether or not Burks will indeed be traded remains to be seen, but it certainly sounds like there is interest in his services.

The Cavs (7-21 and 4th in the Central Division standings) will be back in action on Friday night, as they’re scheduled to host the Milwaukee Bucks. Tip-off inside Quicken Loans Arena is set for 7:30 p.m. EST with FOX Sports Ohio having live broadcast coverage. 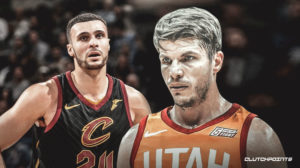