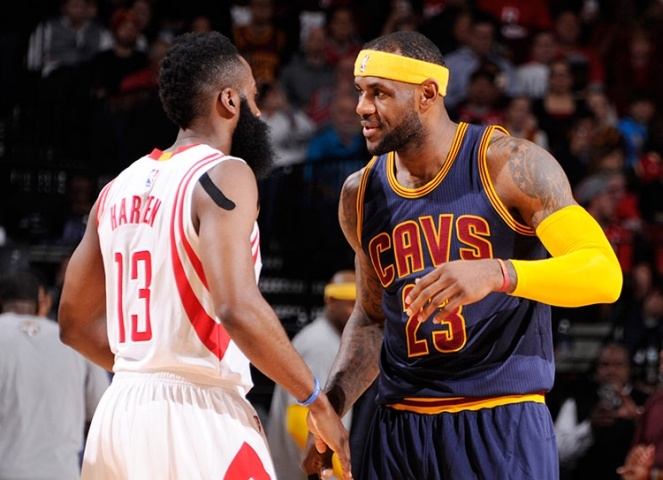 In a battle featuring the league’s top scorers and two MVP candidates, James Harden and the Houston Rockets defeat LeBron James and the Cleveland Cavaliers with a 105-`03 OT win. LeBron netted 37 points, on 35 shots, while Tristan Thompson had 14 points and a season-high 19 rebounds in Kyrie Irving’s absense. Harden countered with 33 points, on 18 shots and 18 free-throws for the Rockets, who were in their 15th game without Dwight Howard. LeBron was making his return from a one-game absence, and Elias Sports Bureau shows that LeBron usually comes back strong after missing games:

From Elias: LeBron James has averaged 31 pts & shot .603 in 3 games he played after sitting out the Cavs’ previous game.

The game started off rather conservative in terms of fouls, as neither team picked up a foul until about halfway through the quarter. Aside from a clock malfunction, the referees didn’t blow the whistle until a Kevin Love foul at the six minute mark of the quarter. The Cavs’ scoring was distributed across the board, with Love and Timofey Mozgov each with 8 points, while LeBron added six. Both teams were sloppy with the ball, with turnovers running rampant in the first quarter.

LeBron came into the second quarter with a fire; he had 5 points in the first minute, and was bent on scoring. He finished with 15 points at the half, while Love tagged behind with twelve. Something to note was LeBron’s jump shot form, especially from three-point range. He rarely got off the ground when he shot, almost as if he was shooting a free throw. This was unusual because he typically gets plenty of air under his jump shots.

The Cavs and Rockets kept this an intense and closely-knit game. Both teams played exceptionally well, with both the MVP candidates with 15 points at halftime. However, the Cavs were held scoreless in the final 3 minutes of the half, allowing the Rockets to squeeze ahead with a 50-47 halftime lead. Something of concern for the Cavs was the amount of three pointers they attempted. They took 18 threes, many of them were shots they settled for, and only hit three of them.

The Rockets continued their run in the third quarter with some quick baskets to push their lead to 10. Things started to get really testy this quarter, as there were a couple heated exchanges and technical fouls called. In the first half, LeBron would get hacked on a couple of his drives to the basket, but couldn’t get a foul call. His frustrations would carry into the third, as he would get called for a few offensive fouls, some of which seemed like frustration fouls.

During the third quarter, LeBron drove the lane, and landed on Patrick Beverly, who swiped at James after he proceeded to use him to lift himself up. The refs gave them each a technical foul, though James would also give Beverly a bump as he walked by later. On another possession, Trevor Ariza would confront Timofey Mozgov after he fouled Harden; an altercation that earned him a technical.

Later on, Harden would get called for a flagrant foul 1 on LeBron James for kicking him in the groin as he was falling. This prompted a livid reaction from James, who would get involved in another heated exchange with Harden and even Cory Brewer. Brewer and Tristan Thompson would get called for double technicals in that exchange, while James, who already had a technical foul, was lucky not to pick up another one, as it would result in an automatic ejection from the game.

After shooting just 42% and trailing by eight prior, the Cavs start the fourth on a surge, tying the game within the first two minutes. After LeBron checked in, he continued his performance by hitting some tough shots, netting a transition block on Terrence Jones, and then throwing up a perfect lob to Tristan Thompson for an alley-oop slam. The Cavs took the lead on a few more tough shots from James.

However, Harden hit a big driving and-one layup to take the lead for the Rockets with 2 minutes to go. LeBron knocked down a three, and Thompson netted some free-throws to keep the Cavs in the game. On the final possession, with the game tied, LeBron settled for another long two-point shot and came up short, allowing the game to go into overtime. With another five minutes of action to go, both LeBron and Harden would demand the ball and play one-on-one basketball throughout. The difference-maker in this game however, was LeBron’s performance at the foul line. He shot 3/11 from the charity stripe and missed two crucial ones when the Cavs were down by one with under four seconds to go. Harden would knock down a free throw to extend the lead to two before intentionally missing the second to try and deplete the last 0.6 seconds from the game clock. The Cavs called a timeout with 0.3 seconds to go, but it wasn’t enough time as James Jones would not get his shot off in time.

This was a rather uncharacteristic game for LeBron James. Typically he tries to get his teammates involved in the offense and concedes his scoring role in order to do so. Tonight, he had 35 field goal attempts; the most he’s had since 2006. Since many of those attempts came as long two’s or part of his twelve three point attempts, he came up rather inefficient, only connecting on 15 of those 35 attempts.

Perhaps he was trying to outplay Harden, who has a higher MVP standing than him this season. Perhaps he saw Kyrie Irving’s absence as a need to step up and take more shots. In either case, his performance would otherwise have been enough for a victory had he hit a few more foul shots. His eight missed free throws ties a season high for the NBA this season.

With this second straight loss, the Cavs fall to 37-14: good for fourth in the Eastern Conference. They play the Boston Celtics on Tuesday, a game where Kyrie Irving is expected to make his return from a two game absence. 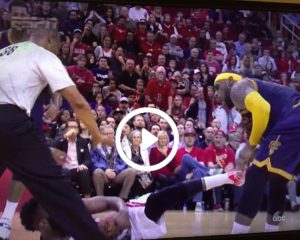