The Cleveland Cavaliers have begun their very busy offseason since the loss to the Warriors in the NBA Finals. The need for a playmaker and scorer once Kyrie Irving and Kevin Love went down was more apparent than ever, and management of the Cavs seem to feel the same way.

According to Brian Windhorst, who has had a questionable reporting history of late, the Cavs are looking to trade their #24 pick in this week’s draft along with the contract of Brendan Haywood for a “facilitating guard they can bring in to either back up or play alongside Kyrie Irving.”

During Thursday’s exit interviews, Cavs GM David Griffin said that he would like to make this team more versatile by adding in more playmakers, citing Golden State as a team who made things difficult for the Cavs because of their playmaking and versatility.

“The one thing that we did see in Golden State, and it was something that was very difficult for us to deal with, is they have an incredibly versatile team of multiple facilitating playmakers,” Griffin said. “That’s something we’re going to continue to work upon. The more playmaking facilitators you have that know how to play the game, the better off you are, and I think you saw the value of that in the team that ultimately did win.”

We’ll see exactly what Griffin can do with this contract and pick as the days draw closer to Thursday’s NBA Draft. 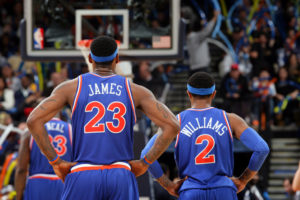