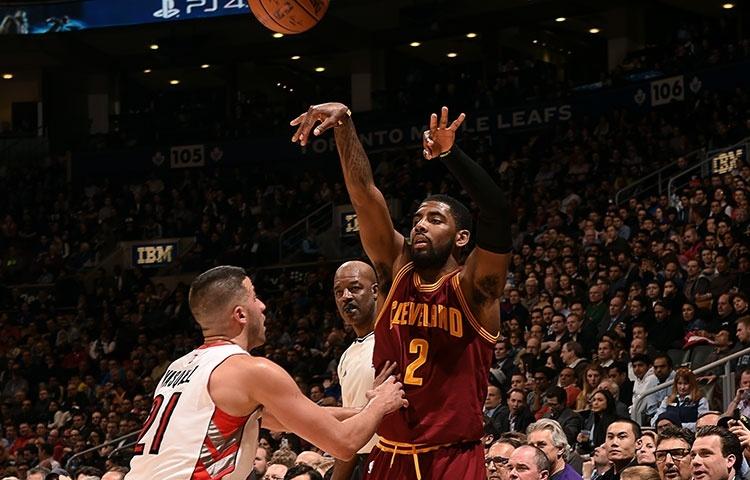 The Cavs cruised past a Kyle Lowry-less Raptors 120-112 this evening in the Air Canada Center. Despite giving up 38 points in the 4th quarter, the Cavs were able to hold on and ride out their lead. This was in large part due to help coming from everyone who played.

Kevin Love and LeBron James both recorded double-double and four more Cavs scored in double digits. James Jones came off the bench hot, scorching the net with 4 threes and coming away with 15 points. A big key to the Cavs success was their ability to spread the ball around (27 assists) as well as knock down open shots (40-78, 51.3% shooting). They were also hot from beyond the arc, knocking down 15 out of 36 3 pointers (41.7%). Another big key to their scoring was being aggressive and getting to the line for 34 free throws, and coming away with 25 points (73.5%).

Everything seemed to go well for the Cavs except for their defense. They’ve been allowing an average of 98 points per game, so 112 is a bit high. The biggest thing that stood out was the lack of post defense. Without Kyle Lowry, who sat out for rest, the Raptors penetrated the paint with Jonas Valanciunas and James Johnson. Valanciunas took over the paint, dominating K Love and Mozgov, scoring 26 points on 12-17 shooting as well as pulling down 4 offensive boards. Overall the Cavs gave up 50 points in the paint, with Mozgov and Tristan Thompson only pulling down 6 boards between them. Maybe the big men were just tired, both coming off of an impressive last two games. Luckily, the Cavs were able to overcome the poor defense with better offense, scoring 18 points over their average of 102.

Despite their failure to maintain the double digit lead throughout as Toronto came back to take the lead in the fourth, but timely three-point shooting from LeBron James, James Jones, and J.R. Smith along with clutch free throw shooting helped the Cavs put the Raptors away down the stretch.

LeBron James led the way tonight, scoring 29 points, brought down six rebounds, and dished out 14 assists. Kevin Love had 22 points, including 4-7 from three, 10 rebounds, and no turnovers. Kyrie Irving pitched in 26 points and eight assists. Timofey Mozgov had 10 points, J.R. Smith had 15 points, eight rebounds, and James Jones helped out with 14 points on 4-7 from downtown.

The Cavs stay on the road for their next game as they take on the Atlanta Hawks in Philips Arena Friday at 7:30 PM EST.

Kyrie Irving takes the Raptors to school and scores on the incredible drive and last-second reverse.

LeBron James gets brought down hard by Jonas Valanciunas. Valanciunas received a flagrant foul 1 for it.

LeBron with the beautiful no look pass: