FULL HIGHLIGHTS: Cavs Collapse In Fourth Quarter And Lose Much More Than Just One Game; 97-99 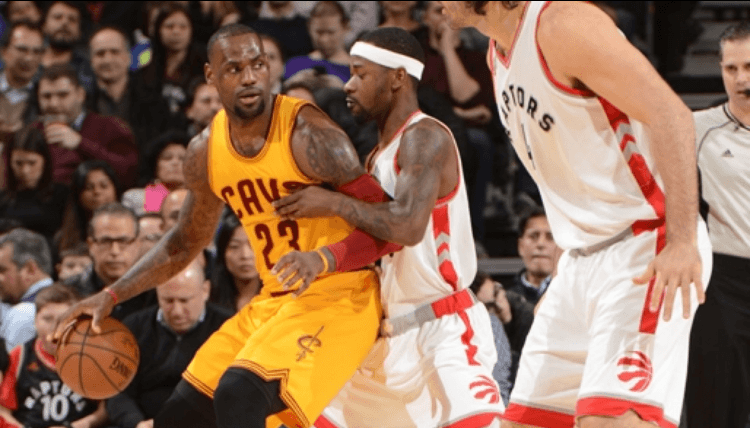 In a game that might have been a preview of the eastern conference finals, the Cavs lost to the Raptors by the score 99-97. The Cavs had no answer for the Raptors All-Star point guard Kyle Lowry, as he torched the defense for a career high 43 points, on 15-20 shooting from the field. Even with the amazing play of Lowry, the Cavs should have closed this one out after building a 9-point lead late in the fourth quarter. Lowry’s last basket, a step-back jumper to put the Raptors up 2 with three seconds left was the nail in the coffin for the Cavs. LeBron’s airball from long range at the buzzer made this loss particularly hard to swallow.

The Cavaliers started hot and raced out to an early 7-0 lead. The defense was locked in early, as the Cavs held the Raptors to just 6 points in the first 6 minutes of the game. Four separate players hit shots from behind the 3-point arc in just the first quarter, and the Cavs racked up 7 assists on their way to a 31-21 lead after the first 12 minutes. LeBron led the way with 8 points, and Kevin Love followed with 7.

The bench came in to start the second quarter and the Raptors quickly took advantage. They started the second quarter on a 10-2 run, cutting the lead to two at 33-31. The Cavs offense struggled to keep their pace and did not shoot the ball well in the quarter. After scoring 31 first quarter points, the Cavs could only muster 18 in the second. The team was able to hold the lead and play better defense once the first unit re-entered the game, taking a 49-45 lead into the locker room at the half. For the half, LeBron led the way with 11 points, while the bench contributed offensively with 20.

The Cavs held the lead for most of the second half, and for several minutes were up by double-digits. They controlled the third quarter from start to finish, and up until the last 5 minutes of the game, it seemed as though a win was in-hand. With the lead at nine at 91-82, the Raptors mounted their comeback, largely because of the play of Lowry. He went on to score 11 points in the final five minutes, outscoring the Cavs by himself in that time.

LeBron led the Cavs with 25 points, 8 rebounds and 7 assists. Kevin Love has a solid all-around game with 20 points, 9 rebounds, and 5 assists. Kyrie Irving struggled on both ends of the court, scoring just 10 points on 4-11 shooting. He was taken off of Kyle Lowry in favor of Iman Shumpert and Matthew Dellavedova for most of the game because he was ineffective in containing him.

The loss drops the Cavs’ 3-game lead in the east to just two over the Raptors. The Cavs have now lost the season series to the Raptors, having lost both games in Toronto by a total of 6 points. The team returns to the court as they visit the Washington Wizards in an early game on Sunday afternoon. JUST IN: REPORT: Joe Johnson Has Passed On Signing With The Cleveland Cavaliers