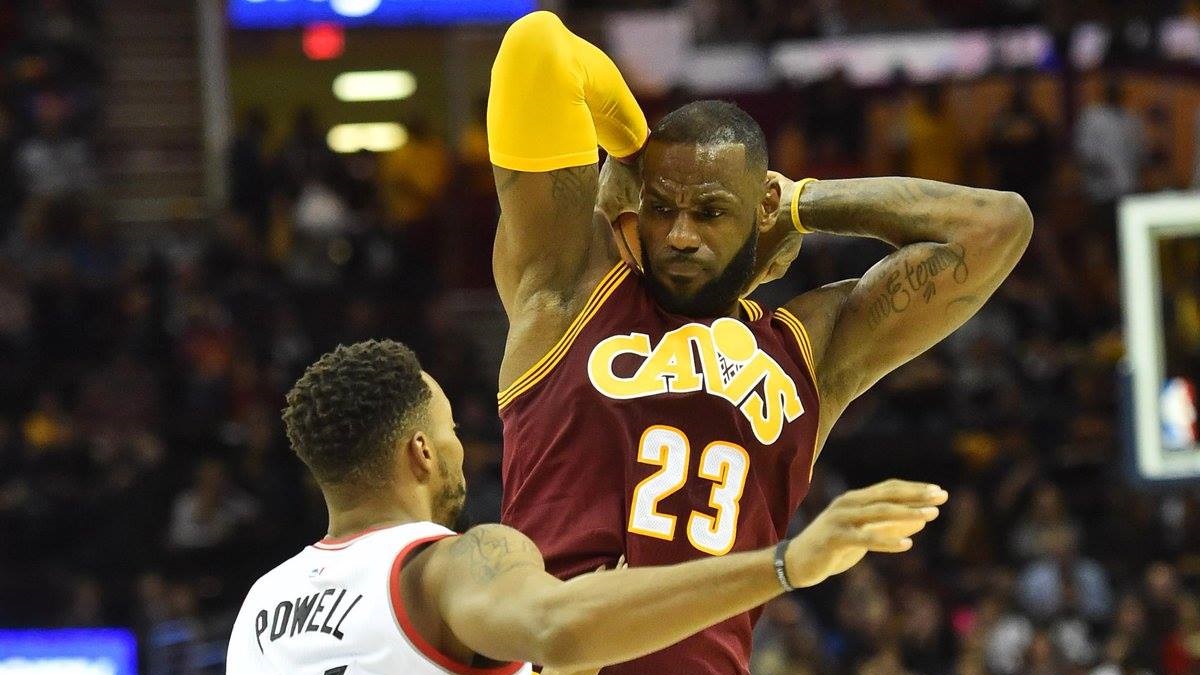 A meeting of Eastern Conference heavyweights took place tonight, as the Toronto Raptors entered Quicken Loans Arena to face the Cleveland Cavaliers. In a fiercely competitive and entertaining contest, the Cavaliers displayed their championship resilience to overcome the stubborn raptors, behind a monster performance by LeBron James.

It what may be a preview of this seasons conference finals, the outing between the two best teams in the east did not disappoint. The Raptors held the league’s best scorer coming in, as DeMar DeRozan entered the game averaging 34 points per contest. Both teams started well, and as DeRozan found his shot early, the Cavs had to respond, and respond quickly. The Cavs big three wasn’t going to take a backwards step, and they put their stamp on the game early. Kyrie Irving got going as he had eight points, three rounds and two assists after one, Kevin Love had six points and pulled down five boards, and LeBron James super aggressive early with a quick seven points and three rebounds to start the matchup. Cavaliers up 30-25 after one.

The second half continued the scoring trend, as both teams got pretty much everything they wanted offensively. The Raptors showed exactly why they were runners up in the east last season, as their spirited effort continued to push the Cavs. They kept running, and had 19 fast break points in the first half. It was their mission all night long to push the ball, and with the elevated pace, the scoring was coming easy for Toronto in the open floor. They continued to chip away, and the Cavs had to execute offensively to keep the Raptors at bay. Their half-court defense was excellent, but they couldn’t stop the ball in transition. It would definitely be an area of focus in the halftime locker room. Cavs hold a 61-57 advantage at intermission, with Love leading the way with 16 points and seven rebounds, James’ floor game was flowing with 13 points, five rebounds, four assists, Irving with eight points four rebounds and two assists, and Channing Frye putting in eight points of his own at the main break.

Coming out of the locker room, the Cavs were looking for an improved defensive effort in transition to start the second half. To their credit, the Raptors went away from the DeRozan isolation, as they moved the ball and got open looks for their shooters. Role players were beginning to become a factor in the contest, as the Raptors steadily put the ball in the basket. But as always, James sensed the moment, and went into takeover mode along with Tristan Thompson. James had an efficient 10 points in the quarter, as well as adding three rebounds and dishing out four assists bringing his total to 28 points, eight assists and eight rebounds. Tristan Thompson found life, and was assaulting the glass registering a double-double of 15 points and 10 boards to end the third period. Love also had a double-double after three with 18 points and 12 rebounds. After three, Cavaliers up seven behind James’ push, 91-84.

This game was always heading down to the wire, and the fourth quarter was a pulsating affair. The Cavs needed all their championship experience, as the Raptors continued to push the pace and eventually took the lead. Clutch three pointers from Kyrie Irving and Channing Frye kept the Cavaliers in the game, before the Raptors opened up their largest lead of the game with seven late in the fourth after a Terrence Ross dagger. It seemed as though the game may be done, but the Cavs showed heart. They fought, and after executing out of some excellent timeout plays, the Cavs were right back in the contest. Frye was incredible in the last period, as his hot shooting kept the Cavs in it, and then lifted them to take the lead once again. The Wine and Gold then turned up the heat defensively, and timely stops combined with a Channing Frye dagger three-pointer from LeBron James handed the Cavs the victory in a nail biter. Frye was absolutely superb in the final period, having 13 points in the last period alone, linking brilliantly with James in the pick-and-roll.

The Cavaliers now move to 9-1 on the season, and extend their NBA record of hitting 10 or more three pointers in 10 straight games. They combined for 13 triples on the night, shooting an impressive 39% from downtown. It was the first time Toronto has lost when Lowry and DeRozan have combined for 50 points this season, they were 5-0 before tonight.

With NBA legend Oscar Robertson in the building, James did his idol proud with a monster 28 points, nine rebounds and 14 assists, falling one rebound shy of a Big O type triple double night. Kyrie Irving had 24 points, five rebounds and four assists and two steals, Kevin Love registered 19 points and 13 rebounds, Tristan Thompson had 15 points and 11 rebounds and Channing Frye was amazing yet again with 21 points off the bench connecting on 5/8 three pointers on the night.

The Cavs now travel to Bankers Life Fieldhouse to take on the Indiana Pacers tomorrow night, in what will no doubt be a tough matchup again.