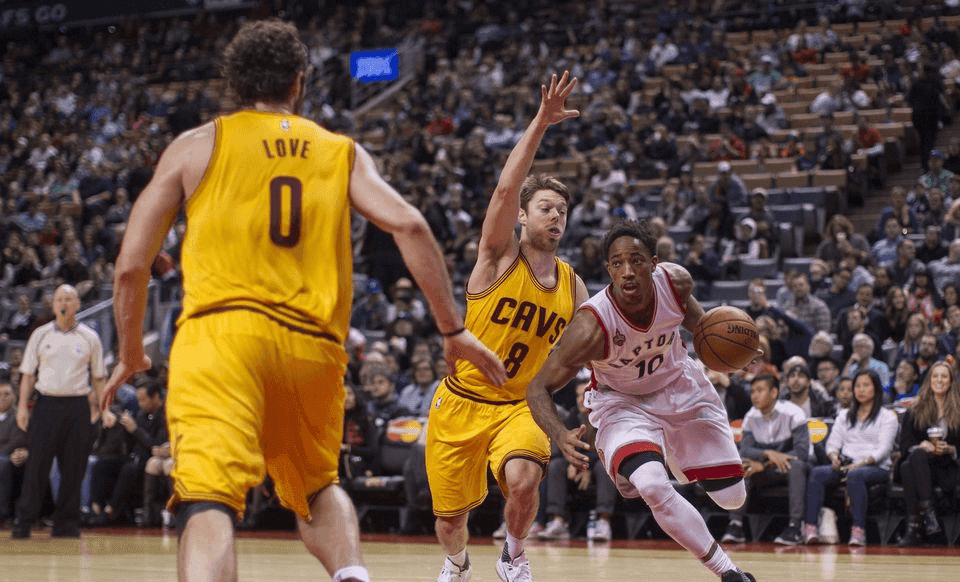 The Cleveland Cavaliers came to Canada winless but with much excitement as they knew they were facing the Toronto Raptors with added reinforcement.

After months of being sidelined, All Star power forward Kevin Love finally returns to fold for the Cavaliers. LeBron James and Richard Jefferson rested the night out.

The Raptors started out very active while the Cavaliers obviously looked to get Kevin Love involved early on but found no success, allowing the home team to go up early, 7-2. Love’s first points came within the eight-minute mark of the game via two free throws. In a heart-stopping moment, J.R. Smith landed awkwardly on his ankle after converting on a tough jumper. He was taken out of the game.

Mo Williams scored seven straight points to keep the game close, 17-19 for the Raps. The first quarter ended, 24-28 for the home team.

The second quarter started on a positive note for Cleveland as J.R. Smith returned to the game after the injury scare early on. Kevin Love and Anderson Varejao connected on a highlight play as Love saved the ball from going off the baseline and, in one motion, scooped a behind the back pass to Varejao for the tear drop. Another scare happened but this time it was on the Raptors’ end as Bismack Biyombo suffered a bad fall to his wrist after a tip-in attempt. He appeared to dust it off but went to the bench immediately.

J.R. Smith looked spry as he weaved through the defense to knock down a jumper and give the Cavs a five point lead, 36-31. The half ended with the Cavaliers leading the Raptors, 42-41. Mo Williams led the scoring for Cleveland with nine points while Jonas Valanciunas had eight points to pace Toronto.

Timofey Mozgov started the second half the way he did in the first, by hurting the rim with a big dunk. The Raptors then scored six straight to take control of the game, 47-44. For the second time, Matthew Dellavedova lobbed a pass to Mozgov for another slam to give the Cavs the lead, 53-51. Jared Cunningham and Joe Harris combined to score the Cavaliers’ final five points, allowing the visitors to lead the game, 64-60 after three quarters.

The fourth quarter started with Anderson Varejao hitting a running layup off a Matthew Dellavedova pass. At this point, Dellavedova has assisted on the three of the Cavaliers’ last four field goals. Bismack Biyombo scored on a two to cap off a 6-0 run by Toronto, tying the game at 66 apiece.

The Raptors blitzed to a 19-3 run as they erect a 10-point lead, 79-69, with a little over four minutes left in the game. The Canadian tandem of Corey Joseph and Anthony Bennett teamed up to score the last eight points for Toronto. The Cavaliers tried to fight for life but the Raptors have already built a good lead as the final buzzer sounded with Cleveland still winless in the preseason.

The Cavaliers fall to the Raptors, 81-87. Mo Williams’ 13 points led the scoring for Cleveland while Jonas Valanciunas ended up with 12 points. Kevin Love played 12 minutes, as he finished with six points, four rebounds, two assists, two steals, and one block.

Kevin Love, in his first appearance on the court in over six months, looks like he hasn’t missed a step.

Kevin Love immediately makes his impact felt as he grabs the defensive rebound, outlets to Delly at half-court, and Delly sets up Mozgov with a beautiful alley oop pass for the slam.

Anderson Varejao loses the ball on the drive, but Kevin Love saves the loose ball back to Andy with a beautiful behind the back pass for the floater.

Matthew Dellavedova takes the Timofey Mozgov screen, and then crosses over when Lowry trips, and hits the wide open three-pointer.

Matthew Dellavedova takes the pass from Mozgov, pump fakes to send the defending DeMarre Carroll flying by, and then drives towards the hoop. He then finds Mozgov with the beautiful alley oop pass for the dunk.