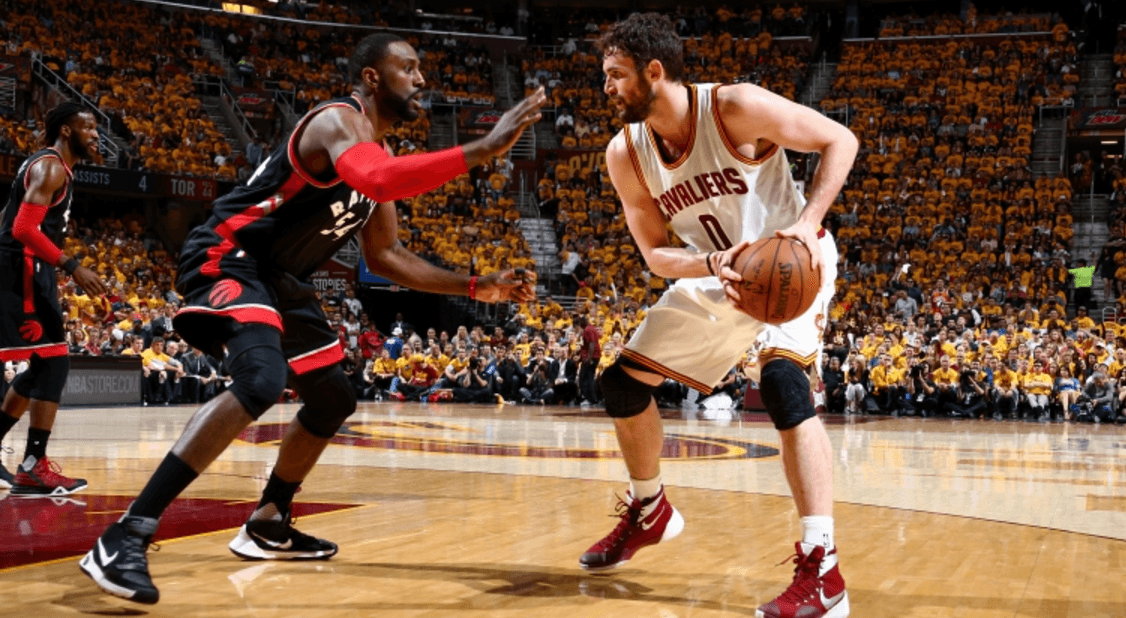 Order was restored in the Eastern Conference tonight, with the Cavs taking a 3-2 lead in the series against Toronto, putting them just one win away from a second consecutive trip to the NBA Finals. They did so in convincing fashion, dominating the Raptors in every facet of the game, and ultimately winning by the score of 116-78. They flirted with a 40-point lead for much of the game, and made the adjustments necessary to disrupt the rhythm that all-stars Kyle Lowry and DeMar DeRozan had found in the two games played north of the border. The Cavs aggressive, trapping defense translated to missed shots and turnovers by the Raptors, and the aggressive defensive mindset transferred to the offensive end, especially for Kevin Love.

Love struggled in Toronto in games three and four, but came out of the gates focused and looking to attack in this one. He led the Cavs early, making his first six shots, including three from beyond the arc, on his way to 19 first half points. His energy was instrumental in the first quarter, as the Cavs jumped out to a 37-19 lead. He scored 12 in the quarter, followed by Kyrie Irving with 11. LeBron James played the role of distributor early, racking up four assists in the quarter. The defense was the real story early on, as Lowry was held scoreless and DeRozan was held to just four first quarter points.

The Cavs stretched the lead even more in the second quarter, taking a 65-34 lead into the half. The defense was in full lockdown mode, not allowing any single Raptor to score more than seven first half points. The Cavs held Toronto to just 38% shooting in the first half, while shooting 63% on their end. The big guys, Love and Tristan Thompson in particular, took command of the paint as well, outrebounding Toronto 23-10 in the first half. Bismack Biyombo, who dominated the paint in games three and four with 40 combined rebounds, only had four in the first half.

The second half was mostly garbage time, as Love left the game for good with more than seven minutes remaining in the third quarter. LeBron went to the bench with two minutes left in the third, and Kyrie followed just after that. The Cavs took their first 40-point lead at 98-58 on a Channing Frye three, one of the team’s 10 makes from deep. Unlike the games in Toronto, where the Cavs took 41 three-point attempts in each game, tonight they attacked in transition and didn’t settle in their half-court offense.

The Cavs will try to close out the series on Friday night, but to do so they’ll have to do something that they haven’t done yet this season – win in Toronto. The resilient Raptors will be desperate to force a game seven and will feed off of their home fans to do it. Hopefully the Cavs bring the same mindset that they came with tonight, because Lowry and DeRozan will certainly give them their best shot. 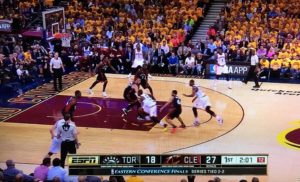