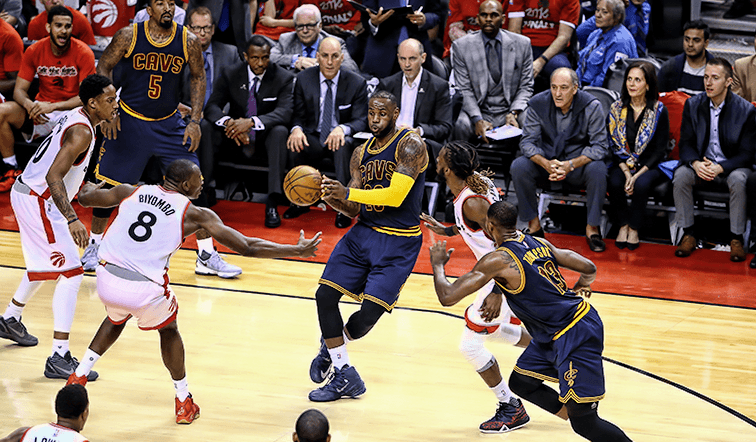 The Cavs comeback effort fell short tonight, as the squad could not overcome a very poor shooting night to take down the Toronto Raptors, falling by the score of 105-99. LeBron James scored 29 points to lead the Cavs, followed by 26 points from Kyrie Irving, but the rest of the team struggled and ultimately could not compensate for the strong game by the backcourt of Kyle Lowry and DeMar DeRozan. For the second game in a row, the Cavs took 41 three-point attempts, and tonight they only made 13 of them. A strong comeback in the second half wasn’t enough, as the Raptors made the critical plays down the stretch and took control late to seal the win.

The home crown energized the Raptors early, as they ran out to a 27-24 first quarter lead. The Cavs would have struggled to play worse offensively. They shot 9-25 from the floor, including a miserable 3-16 in the first period. Kevin Love struggled mightily, shooting just 2-8 from the floor, and with many of those being wide open looks. The Cavs, who set records earlier in the playoffs for 3-point accuracy, could not find the range, even with the Raptors packing the paint and forcing them to settle for open long-range shots.

The second quarter, in all three games of this series thus far, has proven to be critical to the outcome, and tonight the Raptors took advantage of the Cavs lackluster defense to increase their lead at the half to 57-41. Kyle Lowry was instrumental in gaining the lead for the Raptors. For the half, he shot 8-11 from the floor and connected on four of his six attempts from distance to lead the home team with 20 first half points. LeBron and Kyrie responded to the game three loss with 16 and 11 points in the first half, but no other Cavalier had more than five points through 24 minutes of action. The shooting for the Cavs was as bad as it has been throughout the playoffs, as they connected on just three of their 22 three-point attempts.

The Cavs were able to make up some ground throughout the third quarter, cutting the lead to nine at 78-69 heading into the final period. Kyrie scored 12 points in the quarter, helping to cut into the Raptors lead and nullify some of the damage done by his point guard counterpart Kyle Lowry. The real run for the Cavs came in the beginning of the fourth quarter, when the connected on their first eleven shots from the field, including three from behind the arc from Channing Frye.

The beginning of the fourth quarter started with just one starter on the court for the Cavs, but the offense found its rhythm and actually took the lead for the first time in the game at 84-83 on a LeBron driving layup. The Cavs scored on six straight possessions while running the same play each time down court. In the beginning of the quarter, the Raptors has no answer for the Cavs spacing and ball movement, and at one point led the game by three at 92-89. The Raptors had an answer though, and they fought back to reclaim the lead and not relinquish it for the rest of the game. From the five-minute mark to the three-minute mark of the fourth quarter, the Cavs were held scoreless, and that proved to be the difference in the game.

Game five will be Wednesday night in Cleveland, and the Cavs will need to step up and make their presence felt on both ends of the court to reclaim control of this series. 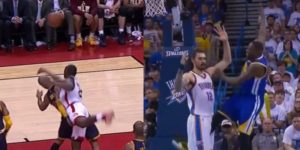