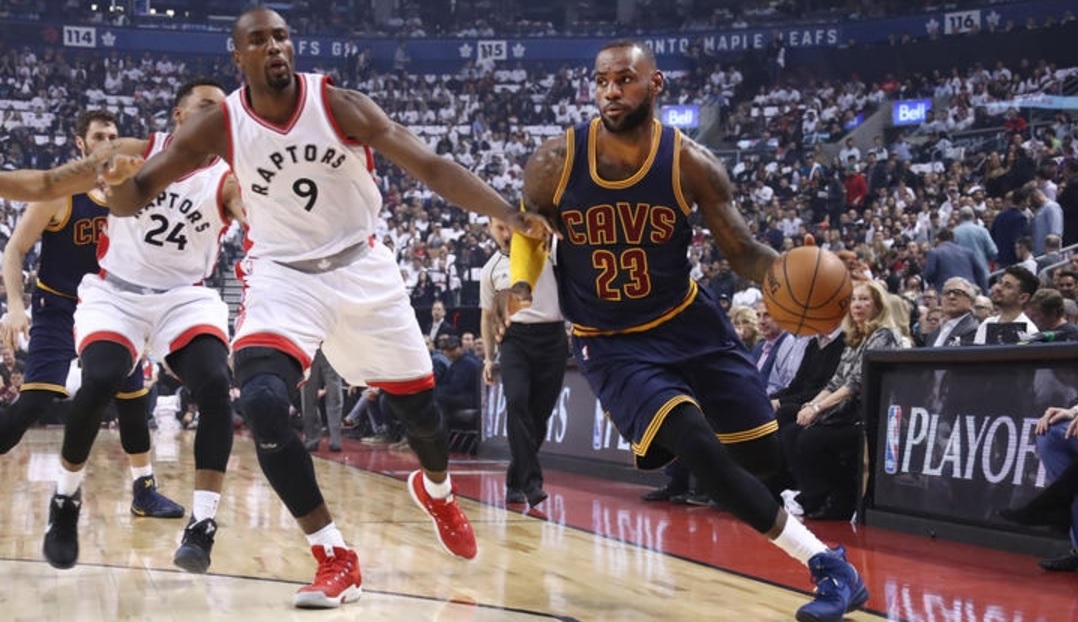 The Cavaliers came out a bit sloppy in the early stages of tonight’s Game 3 matchup against the Raptors. In fact, the Cavs had three turnovers in the first four minutes of play. Despite their early mishaps, the champs managed to keep the game close.

Near the midway point of the opening frame, the Cavs took their first lead by way of a Kevin Love jumpshot. From there, K-Love picked up his lunch pale and went to work, scoring eight of Cleveland’s first 13 points.

An around the horn three from J.R. Smith pushed the Cavs’ lead to six with the minutes ticking away in the first.

The Raptors managed to draw within two points of the lead near the three minute mark thanks to yet another Cleveland turnover, forcing a timeout from Cavs head coach Tyronn Lue.

Coming out of the aforementioned timeout, Raptors guard DeMar DeRozan tied the game with an easy two. A back-and-forth battle ensued until the first quarter ended with the Cavs holding a four point advantage, 28-24. Love led all scorers in the first with 10 points and four rebounds.

LeBron James opened the second quarter with an easy driving layup. The Raptors, who were playing without Kyle Lowry due to an ankle injury, had no answer for The King. On the next possession, James gave a quick jab-step and buried a three.

The Raptors weren’t ready to lie down yet, though. A quick 6-2 run brought their nine-point deficit down to five. Once again, coach Lue called a timeout to rally his troops.

That Cavaliers sloppiness we discussed earlier kept rearing its ugly head in the second quarter. In fact, Cleveland had seven turnovers in first 18 minutes of tonight’s game. All of a sudden, the Raptors were within two.

For whatever reason, the Cavs went cold for a bit in the closing minutes of the second quarter, allowing the Raptors to once again tie the game, this time at 43. The tie was short-lived, however, as Kyrie Irving drilled a walk-up 25-footer to give the Cavs a three point lead.

DeRozan gave the Raptors the lead with a driving and-one. The crowd was into it, and at the break, the Raptors led by three, 52-49.

Coming out of the locker room, Smith picked up his fourth foul, allowing the Raptors to extend their lead to five by way of a pair of DeRozan free-throws.

A couple of solid possessions and two free-throws from James tied the game at 54. A spirited battle ensued…

Smith picked up yet another foul at the seven minute mark of the third — his fifth. Iman Shumpert took the floor in his place.

DeRozan really had his shot going through the first three quarters of play. In fact, he had 30 points in his first 27 minutes of action. Led by DeRozan’s scoring, the Raptors maintained their lead until the Cavs tied the game once more near the four minute mark of the third.

A pair of cold-blooded three’s from Kyle Korver pushed Cleveland in front by two points at the end of the third quarter, 79-77.

Korver opened the fourth quarter with another three-pointer, pushing his tally from downtown to 4-of-5. The crowd inside The Air Canada Centre grew silent…

An 8-2 run had the Cavs leading by eight points (87-79) with just over nine minutes remaining in the game.

Seeming to smell blood, LeBron and the Cavs started to get that look in their eyes — that ‘let’s go up three games to none in this series’ look. With under eight minutes to go, James pushed the Cavs’ lead to 12 by way of two free-throws.

James then proceeded to knock down a dagger three-point shot. The crowd began to whisper. Two more buckets at the stripe from The King and the Cavs were leading by 17. An alley-oop to Tristan Thompson forced coach Casey to call a timeout.

With under six minutes to play, the Raptors were in trouble. It seemed like they couldn’t buy a bucket from a hardware store. In fact, they were 1-of-12 through the first seven minutes of the fourth quarter.

In the end, Cleveland’s big lead was just too much to overcome. Holding the Raptors to 17 points in the fourth quarter played a part in that as well. With the crowd mostly thinned outside inside the arena, the scoreboard read 115-94 when the final horn blew, giving the Cavs a commanding 3-0 lead in the series.

[FINAL] Cavaliers erupted in the fourth quarter to beat the Raptors, 115-94.

Last stats for the night: #Cavs have swept all 8 playoff opponents — including Indy — after taking a 3-0 series lead.

For the third straight game, LeBron James wins tonight’s game ball. The King finished with 35 points (9-16 from the field, 2-4 from beyond the arc, 15-16 from the charity stripe), eight rebounds, seven assists, and one steal in his 41 minutes of playing time.

Game 4 is set for Sunday at 3:30 p.m. on ABC, right back inside the Air Canada Centre. Will the Cavs sweep their second-round series as they did in the first?