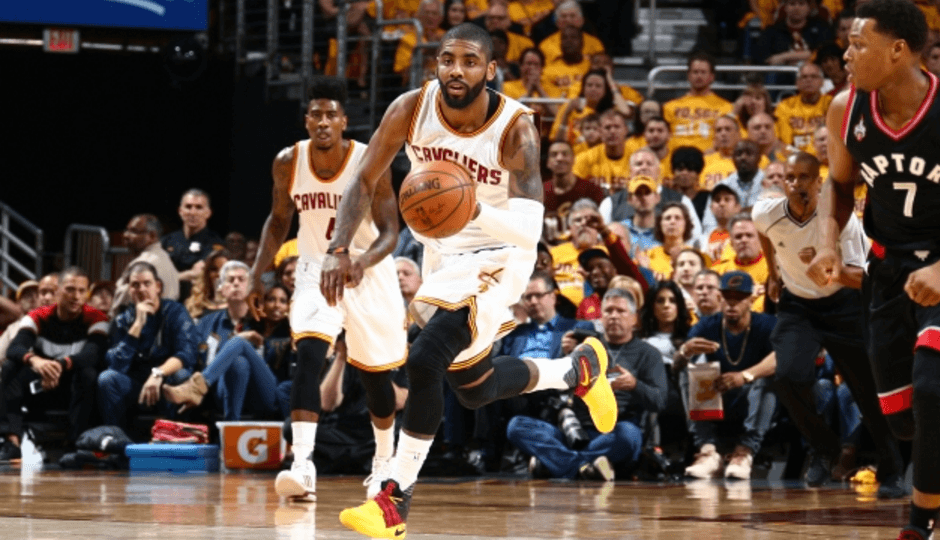 Whatever rust that the Cleveland Cavaliers had after a 9-day layoff did not last long. The team continued their dominance of the eastern conference with a convincing game one victory over the Toronto Raptors. The Raptors, coming off of back-to-back game seven victories in their first two series, were dominated by the rested home team, and were not able to do anything on defense to keep the Cavs from getting and making the shots that they wanted. Kyrie Irving and LeBron James led the way for the Cavs as they raced past the Raptors for a 115-84 victory.

The Raptors, and in particular their all-star DeMar DeRozan, got off to a strong start prior to the Cavs’ takeover. DeRozan made his first six shots to help Toronto take the lead early, but late in the first quarter the Cavs started a run that would put this one away very early. Even after the layoff and the quick Raptors start, the Cavs still scored 33 points in the first quarter to take a five-point lead.

The Cavs defense stepped up in the start of the second quarter and triggered an imposing 22-2 run that gave them command of the game and they would not look back. The run included highlight reel dunks by LeBron and Iman Shumpert and ankle-breaking crossovers by Irving, but perhaps most impressively, the Cavs were able to hold Toronto without a field goal for more than six minutes of game time. The defense was demoralizing for the Raptors, and they were never able to recover. At the half the Cavs led 66-44, and even finished the half on a 10-2 run to take their momentum into the locker room. Kyrie Irving led the Cavs with 18 points at the half, while LeBron followed with 14 points on 7-7 shooting from the field. Through two quarters, LeBron hadn’t missed a shot and managed to shoot from an average of less than two feet from the basket.

Kyrie and LeBron led the way in the third quarter as well, combining for 19 points in the quarter to finish the game with 27 and 24, respectively. The two combined to shoot an incredible 22-30 from the floor for the game. There was nothing that the Raptors could do to slow down the onslaught, and the rout was on quickly into the second half.

The dominant performance went beyond just Kyrie and LeBron, though. The Cavs defense held all-star point guard Kyle Lowry, who had averaged 31 points against the Cavs in the regular season, to just 4-14 shooting and eight points. They outrebounded the Raptors 45-23 and outscored them 56-36 in the paint. The majority of their work was done down low, demoralizing Toronto throughout the game.

Game two of this series is Thursday night in Cleveland. The Cavaliers will look to continue their undefeated streak in this year’s playoffs and come another step closer to their second consecutive NBA Finals appearance. 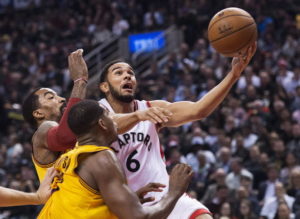 JUST IN: Tristan Thompson on facing Cory Joseph and his Raptors: “I always beat him.”