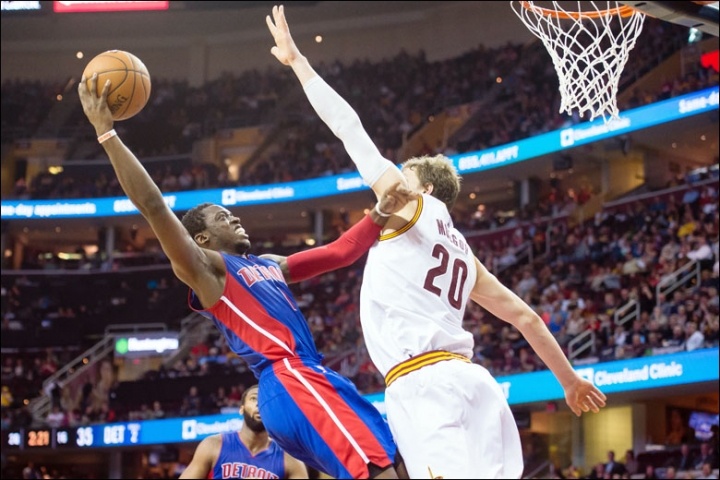 The Cleveland Cavaliers rested four of their five starters for Sunday’s game against the Celtics, but all four returned to game action Monday night against the Pistons in exciting fashion. On the day when Cavs playoff tickets sold out in an unbelievable 36 seconds, Cleveland blew out the Detroit Pistons 109-97 on the backs of a triple double from LeBron James.

The Cavs started out on fire as they welcomed back James, Kyrie Irving, Kevin Love, and J.R. Smith from a game of rest Sunday. Cleveland, who was down 2-3 in the opening minute, went on a berserk 25-4 scoring run to take a 20 point lead at 27-7. Detroit eventually got some baskets to go, but Cleveland kept pouring it on and hit three triples in the final minute and a half for a 36-14 advantage after one quarter of play.

Cleveland continued their hot offensive production to start the second quarter until they hit the 49 point mark. Detroit ran off 12 straight once the Cavs hit 49 to close the gap to 35-49 with about three minutes to play. But Cleveland responded with 10 straight points and 13 of the final 15 points, including three J.R. Smith three-pointers, to take a 25 point halftime lead at 62-37.

Very little defense was played in the third as Detroit outscored Cleveland 36-31 in a quarter with not many missed shots. Caron Butler scored 12 points for the Pistons, but J.R. Smith knocked down four three-pointers and James hit three of his own as they combined for 25 points on seven made threes in the quarter. The Cavs took a 93-73 lead over the Pistons after three quarters of play.

LeBron played the beginning of the fourth, but only to grab his 10th rebound to give him his second triple double of the season. The quarter provided some more good time for Iman Shumpert, James Jones, and Kendrick Perkins to get some good run in as the Cavs closed out the Pistons 109-97 to improve their home record to 30-10. Kyrie Irving did not play in the second half due to right hip tightness,

Irving is officially out for the rest of the game with right hip tightness, according to the Cavs. Calling it a precautionary measure.

J.R. Smith led the way for the Cavs tonight with 28 points on eight made three-point field goals. LeBron James notched his second triple double in just over a week with 21 points, 10 rebounds, and 11 assists. Timofey Mozgov scored 16 points and hauled in 13 rebounds scored 12 points in just 17 minutes of play. Kevin Love scored just seven points with four rebounds tonight, but came up with two blocks on the defensive end for the Cavs.

#Cavs G Kyrie Irving (hip) just walked out arena in good spirits and without complications. Precautionary, it was.

Cleveland closes out the season on Wednesday night against the Washington Wizards. Both teams don’t have much to play for, but David Blatt said that we can expect everyone to suit up, but possibly see a minutes restriction. 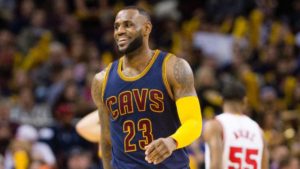 JUST IN: VIDEO: LeBron James Steals And Dishes Behind The Back To Timofey Mozgov