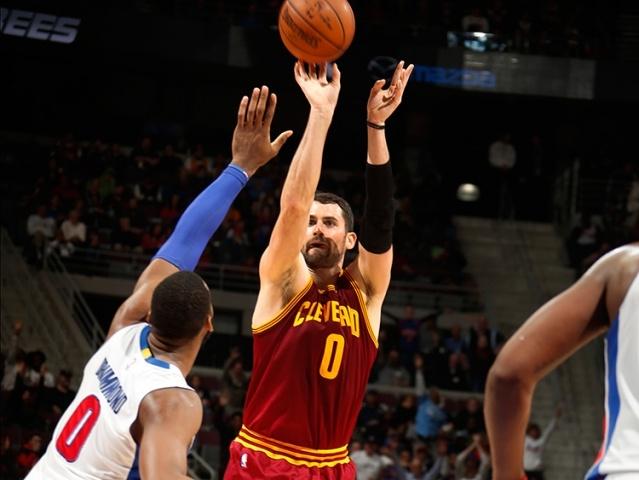 The Cleveland Cavaliers extended their winning streak to three games Tuesday night by defeating the Detroit Pistons in The Palace of Auburn Hills. After a quiet first half, the Cavs came out strong in the second and put the Pistons away behind a career-high eight three-pointers from Kevin Love.

LeBron James and Kyrie Irving started off relatively quiet offensively while looking to get teammates involved. Of course, they took what the defense gave them and had eight points and five assists combined in the first quarter. The real story was the three-point shooting, as Cleveland knocked down five three-pointers in the opening quarter. After taking a 17-8 lead after running off nine straight points, Detroit came back and made it clear they were going to fight the Cavs for this game.

Neither team was really able to get much separation until the midway point of the second quarter. Detroit used a 16-3 run to take a 51-44 lead. Both teams would exchange baskets the rest of the way and the Pistons would take a 62-53 halftime lead. Cleveland had a hard time stopping the dribble penetration of Reggie Jackson and allowed Greg Monroe and Andre Drummond to get too many easy baskets in the paint. The newest Cavalier made his debut tonight as Kendrick Perkins had a dunk from Irving to end the first half.

The third quarter was the comeback quarter as Cleveland went on a 20-3 run to retake the lead at 73-70. Kevin Love knocked down four three-pointers in the quarter, scoring 12 of the Cavaliers’ 24 points in the quarter. Cleveland finally put the clamps on the paint and allowed Drummond and Monroe four combined third-quarter points. They also held Detroit to just 12 points in the third. Kyrie Irving took over the final minute and knocked down back-to-back jumpers to give Cleveland a 77-74 lead going into the fourth quarter.

Cleveland jumped on Detroit to start the fourth and essentially put them away as they went on a 12-4 run to take an 11 point lead. The Cavs led most of the fourth by 10 points until the final minute where Detroit cut it to eight. Following a pair of fouls and four makes at the free-throw line, the Cavs emerged victorious 102-93.

Kevin Love made eight shots on the night, all of which were three-pointers. That tied his career high for threes in a game.

Kevin Love has already tied his career high with 8 threes as @cavs have entered the 4thQ v. DET pic.twitter.com/M26g551eDo

Love had 24 points and nine rebounds, LeBron James had 19 points, seven rebounds, and 11 assists, and Kyrie Irving had 18 poitns and five assists. Timofey Mozgov had a solid game with 14 points, six rebounds, and four blocked shots. J.R. Smith had just four points, and the Cavs bench combined for 23.

Kendrick Perkins made his Cavalier debut tonight after passing his physical Monday night. Perkins wore number 3, previously worn by Dion Waiters, and had this to say about his game:

Perk earlier tonight: "I’m a good guy if I’m on your team … I feel like if another team don’t like me, then I done my job for the night."

The Cleveland Cavaliers, now having won three straight, take on the NBA’s best when the Golden State Warriors come to town Wednesday night for a nationally televised TNT matchup.

With this assist, LeBron James became the all-time leader in assists by a forward, passing Scottie Pippin in the process:

LeBron James lurks until the final moment and snags a pass on the Pistons’ fast break:

Here, LeBron uses a hesitation dribble to get by Caron Butler and finish after the wrap-up foul!