With the return of JR Smith and LeBron James, the Cavaliers used their loss against the Pacers as motivation in destroying the Detroit Pistons on Friday night. The Pistons were without starting point guard Reggie Jackson, and their task to overcome the Cavs was made almost impossible, as the wine and gold came out with tremendous energy.

The game started off with two deeps balls from the Pistons almost instantly, forcing a quick timeout from Tyronn Lue. But the 6-0 lead was as close as Pistons were from being on top, as the Cavs onslaught was forthcoming. The Cavs responded with a James dunk and two quick three pointers from Smith to regain the lead, and they would not give it up for the rest of the night. Smith looked as though he hadn’t missed a beat, as he connected on three of his first four attempts from downtown. Kyrie Irving was also incredible in the first period, dropping a career high assists for a quarter with seven. Tristan Thompson was driving the energy, and the Cavs were feeding off it. He had three blocks alone in the first quarter, and with 11 team assists in the period, they were comprehensively up 30-19 after one.

The Cavaliers started the second period with James, McRae, Frye, Shumpert and Dunleavy on the floor. James wanted to keep the momentum going, and he went about pushing the pace and building on the healthy lead. The Pistons started to find their feet and their offense sets, but James and the second unit kept their ten point cushion. Detroit couldn’t keep up with the pace, and due to the Cavs running game, the Pistons found themselves over the foul limit, putting the Cavs in the bonus early. All the starters returned to end the half, and as Irving got going and Love connected on a right hook shot, the Cavs opened up their largest lead of the game at that point at 17. Both teams go into the interval with the Cavs leading 56-39.

You could sense a blowout was incoming, and the third quarter delivered exactly that. The wine and gold wanted to finish the game early, and the game was over after the third period. The Cavs opened up a 23 point lead with Irving in an absolute zone. He had 14 points in the third period alone, showcasing all his offensive talent in the process. James then opened up his offensive arsenal hitting multiple jump shots, and all of a sudden the Cavaliers established their biggest lead of the season with a 33 point advantage. The Cavs were outstanding, connecting on 8/19 three pointers and shooting 52% from the field as a team. Irving was on fire, and collected his first double-double of the season with 25 points and 11 assists. Cavs up 82-56 after three.

The fourth quarter was simply formalities after that point, with the game already won. The starters got to rest the entire last period, and the bench unit cruised to victory lead by Iman Shumpert’s nice fourth quarter.

It was the perfect response from a Cavaliers team that now has four days off before they suit up again. They needed to go into this mini break with confidence and a big win, and they achieved what they set out to do.

Kyrie Irving had 25 points, 11 assists and 0 turnovers in just 28 minutes. LeBron James finished with 21 points in 28 minutes. Kevin Love had a double-double of 12 points and 13 rebounds in 27 minutes. Tristan Thompson had eight points, 14 rebounds and 4 blocks in 29 minutes. JR Smith added nine points, Iman Shumpert had nine points and Jordan McRae put in seven of his own.

Next up, the Cavs take four days off before they face the Portland Trail Blazers at home on Wednesday night. 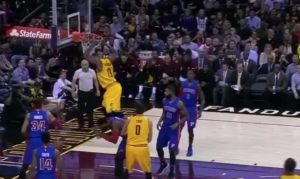