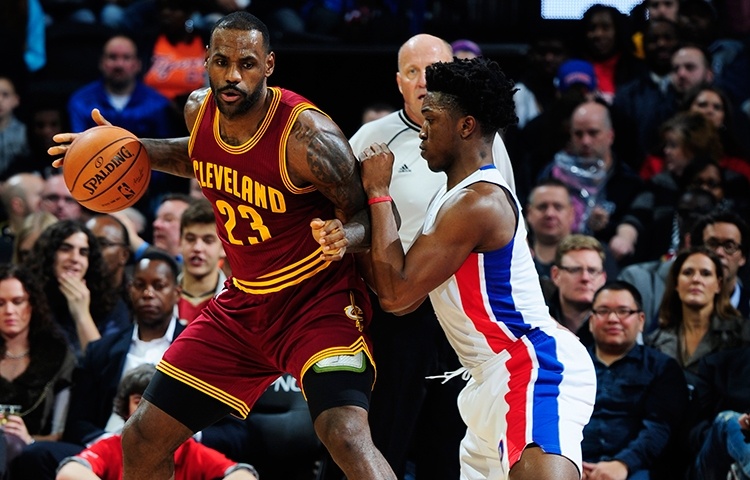 If losing to Milwaukee in double-overtime after mounting a furious fourth quarter comeback was a moral victory, then losing in Detroit tonight after giving up a 10-point fourth quarter lead is a moral defeat. The Cleveland Cavaliers’ bad loss tonight marked the first time this year that they have lost two in a row, and their 3rd loss in four games against Central Division opponents. The team fell apart late in the fourth quarter, and the Pistons finished the game on an 11-2 run for a 104-99 victory.

The game started out slowly for the Cavs defense, which surrendered 31 first quarter points. Detroit point guard Reggie Jackson was dynamic on offense, and the Cavs had no answer for him early in the game. He scored 11 and dished out four assists in the first quarter alone, as the desperate Pistons were at home for the first time since losing four in a row on the road. LeBron James led the Cavs in the first with a team high 10 points, and J.R. Smith finally came out hot, scoring 9 of his 15 total points in the first quarter.

James would stay hot in the second quarter, and would help the Cavs regain control of the pace of the game. He scored in the post, from midrange, and from deep. He has been struggling from three-point range in this early part of the season, but for a few minutes to start the second quarter, he showed us that he still has confidence in himself from long range. The Cavs defense stepped up as well, helping to build a seven point advantage in the middle of the quarter. The Pistons would make a run to end the half, however, thanks in part to some cold shooting by the Cavs. The team closed the half making only two field goals in the last four minutes.

The Cavs gave fans a glimpse of their potential in the third, racing out to an 11-point lead at one point. The ball movement was excellent, with open shots coming to the team easily on almost every possession. The team had better energy on the defensive end of the floor, forcing turnovers and difficult shots. They pushed the pace after misses and got great looks in transition to build the lead. The game seemed to be swinging in favor of the Cavs, but the Pistons wouldn’t go away and the Cavs didn’t play with the killer instinct necessary to put them away. Detroit whittled the lead down to six heading into the fourth, mostly doing so with LeBron James and Kevin Love on the bench resting.

Cleveland maintained the lead in the fourth, exploiting the mismatch that Kevin Love had being defended by the smaller Ersan Ilyasova. Love’s scoring in the paint built the lead back up to 10, but the Cavs fell apart offensively from there. After Love hit two free throws at the three-minute mark, the Cavs would end the game by missing five shots, committing four fouls, and turning the ball over three times, all in the last three minutes of the game. The offense inexcusably looked passive and out of synch, and the Pistons capitalized. They made more plays and hit their free throws down the stretch. Even historically bad free throw shooter Andre Drummond went 3-of-4 after Coach Blatt employed the intentional foul strategy.

It was as bad as it was surprising to see the team limp home the way they did tonight. The Cavs will need to regroup tomorrow and prepare for a primetime game on Thursday night against the Bucks. Hopefully that one will bring a better ending and the beginning of a new winning streak. 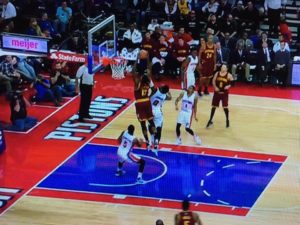