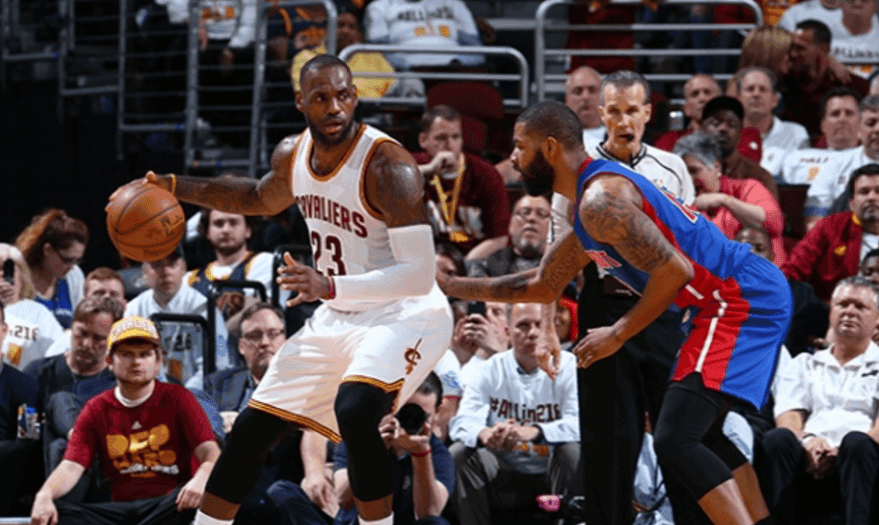 The Cleveland Cavaliers took a 2-0 series lead after defeating the Detroit Pistons 107-90. The Pistons came out of the gates strong by playing with plenty of energy and held a five point lead after the first quarter. They proceeded to scrap and fight and went into halftime only trailing by two points. After building a small lead early on in the third quarter, the Pistons went downhill from there. Cleveland outscored them 27-15 in the quarter and had a 14 point advantage going into the fourth. The Cavaliers opted to use the Hack-a-Drummond strategy at times during the game and it paid off, as he shot 25 percent from the free throw line.

That new up-tempo offensive system that head coach, Tyronn Lue, implemented with Cleveland continues to show as they reached the century mark for the twelve straight game, regular season and playoffs. They had a big four tonight with LeBron James, Kyrie Irving, J.R. Smith, and Kevin Love all scoring in double figures. James led the way with 27 points to go with six rebounds, three assists, three steals. Irving added 22 points and four assists. Smith drained seven three pointers tonight en route to his 21 points. Love exited the game with his typical double-double. He finished with 16 points and 10 rebounds.

After Game 1, there were plenty of things that Cleveland had to do to take Game 2. It is worth noting that they had more turnovers this game and were even out rebounded, but they fixed other aspects to really take over this series. The Cavaliers defense tonight limited Detroit to 43.6 percent shooting. Moreover, Detroit only shot 23.5 percent from three compared to the 51.7 percent they shot in Game 1. The Cavaliers defense undeniably put the clamps down tonight on the Pistons’ shooters.

What was supposed to be a major focus for them in Game 2 was to possibly take less three point attempts and try to get to the free throw line more. Needless to say, they attempted less free throws tonight compared to Game 1 and they threw up a barrage of three pointers, taking three more attempts tonight then they did in the first game. Despite shooting so many threes tonight, they made 52.6 percent of their attempts. A fun statistic; the Cavaliers tied the 2015 Warriors, the 2011 Mavericks, and the 1996 Sonics for the most three point field goals made in a playoff game with 20. It is also worth pointing out; two of those three teams won the NBA championship, the 2011 Mavericks and the 2015 Warriors.

For Detroit, all five starters scored in double digits, but Cleveland was just too much for them tonight. Andre Drummond led Detroit scorers with 20 points and he also grabbed seven rebounds. Point guard, Reggie Jackson, finished with 14 points. One thing that killed the Pistons tonight was their poor shooting. Their hot shooting did not carry over from Game 1 and, as mentioned, they only shot 23.5 percent from downtown.