The Cleveland Cavaliers will be getting a welcome addition to their 2017-18 roster when 22-year old Turkish phenom Cedi Osman arrives to the U.S. to play in the NBA. Osman is about to start the final year of a five-year deal with the Turkish team Anadolu Efes signed back in the summer of 2012. Once that contract is up, Osman will make his move here following in the footsteps of his former Turkish National Team teammate Dario Saric, who now plays for the Philadelphia 76ers.

In a blog post for Eurohoops.net, Osman lets the fans know a little bit about himself, and he stated that he likes a lot of superhero movies and spends a lot of time playing NBA 2K with his teammates.

However, I like to watch a lot of movies. I go to a movie theater two or three times a week. I have enjoyed the recent “Avengers” films, “Batman vs Superman”, and also “Sully” with Tom Hanks which is based on a true story. Those are the kind of movies I love. And of course, when I am at home I also spend time playing NBA 2K, like many of my teammates do. And I usually pick the Cleveland Cavaliers…

A while back, Kevin Durant told Jimmy Fallon that he played as LeBron James’ team in NBA 2K15.

Picking the defending NBA champions as your go-to team is usually a good option, especially since that team holds your NBA rights. It’ll be interesting to see Osman’s transition to the NBA if he indeed ends up playing for the Cavs after this season. 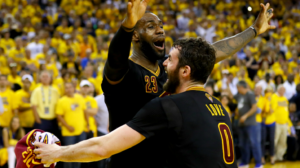