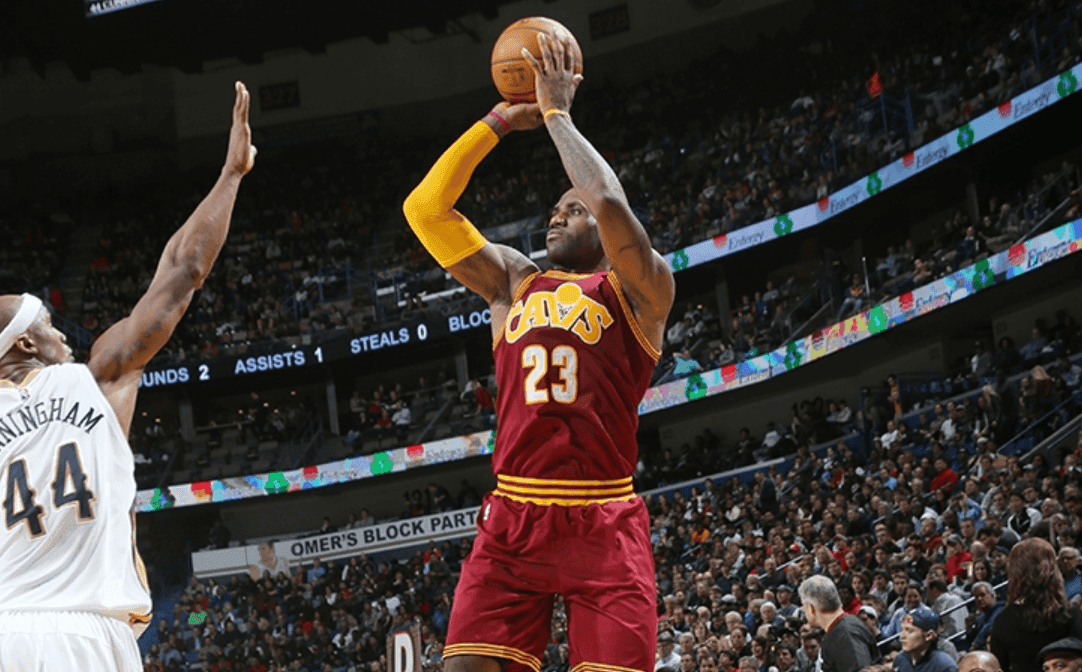 The Cleveland Cavaliers took on the New Orleans Pelicans on Friday night in the first game of a back-to-back set on the road. With the Pelicans finally getting healthy getting Tyreke Evans and Norris Cole back, the Pelicans were goign to be a tough matchup for the Cavs.

The first quarter started as any Cavs fan would hope. J.R. Smith connected on his first three three-pointers, all in under a minute, and finished with five in the first quarter. The Cavs started the game with a 15-4 run, but were unable to retain the lead. Other than a few LeBron James baskets, the Cavs struggled to score outside of Smith and James. Despite the end of quarter struggles, the Cavs lead 27-21 after one quarter of play.

The second quarter was a busy one for both sides. For one, the Cavs players in Kevin Love, Mo Williams, and Matthew Dellavedova started to hit shots. James hit a deep, 30 foot three, and that was followed by Anthony Davis going down with what looked to be a knee injury. Davis would leave the game, but return later in the quarter. LeBron and Ryan Anderson got into it after Anderson bumped James while passing by him. LeBron earned the technical and the Pelican crowd booed him every time he touched the ball. The Pelicans went on a 10-2 run to take a five point deficit and go up three, but the Cavs responded by scoring the final four points to take a 53-52 lead into halftime.

The Cavs came apart in the third, allowing a 26-8 run by the Pelicans and give up their five point lead to trail 82-70 lead. Anthony Davis, Tyreke Evans, and Ryan Anderson had their way all over the floor for the Pelicans. Thankfully, the Cavs were able to go on 7-2 run to trail 84-77 going into the fourth.

The Cavs continued their rough game into the fourth, allowing the Pelicans to go on a 10-4 run to take a 94-81 lead and it looked like this game was just about done. That’s when LeBron James came to the rescue, scoring 23 points in the fourth and 23 of the Cavs final 26 points of the quarter (Matthew Dellavedova hit a three in the middle of the fourth). James led the Cavs all the way back, driving at the rim every single time and getting layup after layup to go down. LeBron gave the Cavs a three point lead on two free throws after the Cavs defense guided them throughout the fourth. Unfortunately, the Cavs allowed a Jrue Holiday three pointer to tie the game and the Cavs could not score as the game was sent into overtime.

In the extra session, the Cavs were outscored 9-3 and could not buy a bucket or even run their offense properly as the Pels executed down the stretch. The Cavs fell 98-104.

LeBron James led the team with 37 points, seven rebounds, and eight assist. Kevin Love had 15 points and 10 rebounds. J.R. Smith had 18 points and four rebounds. He had 15 in the first quarter, but only three the rest of the game. Timofey Mozgov, Matthew Dellavedova, and Mo Williams had eight points apiece.

The Cavs look to get back on track tomorrow night against the Miami Heat.

J.R. Smith starts the game off hot, knocking down three three-pointers in under a minute and a half! He finished with five for the quarter.

LeBron James catches the ball with the shot clock going down. Although he had a little under six seconds to shoot, LeBron pulls up from way downtown and hits!

LeBron James defends Ryan Anderson in the post, but Anderson spins and gets fouled on the shot. After the call, Anderson walks towards the free throw line and shoulders his way by LeBron. James did not like it, and took exception by pushing Anderson out of his way. Can’t do that to the best player in the world, man.

LeBron James leads his team back with some extremely aggressive fourth quarter play: