The Cavs paid The Undertaker to appear at ring night 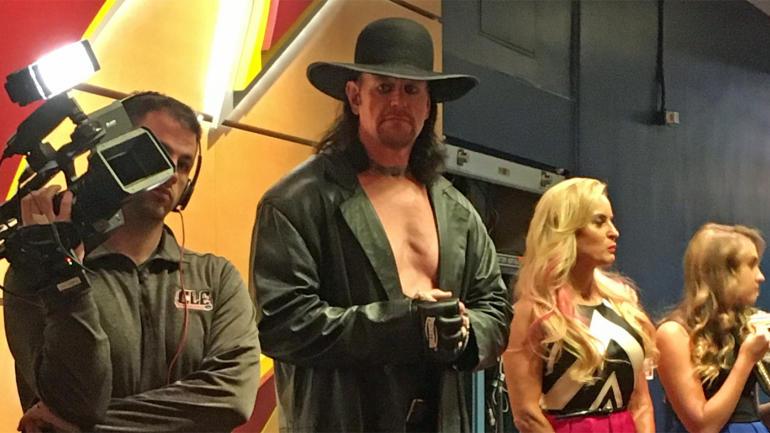 When the WWE requests a meeting with you and your team, it’s probably a good idea to oblige, right?

On October 25th, Cleveland’s defending NBA champion Cavaliers held their home opener against the New York Knicks inside Quicken Loans Arena. The Cavaliers reached out to several officials from the WWE and decided to invite some of their most recognizable faces to the opening night festivities: The Undertaker and Dana Warrior (The Ultimate Warrior’s widow).

WWE spoke to Sports Illustrated with regards to the invitation, saying:

“The Cavs invited WWE to the game and paid for the appearance. As their guests, we were gladly fulfilling their request to meet the team.”

According to some sources, that request was made by none other than LeBron James.

If you’ve followed James’ career closely, you’ll remember his history with the WWE. When the Miami Heat won the NBA championship in 2014, James requested championship belts for the entire team – and got them. James was spotted wearing both Undertaker and Ultimate Warrior tee shirts during their 2016 NBA championship run. In Game 6 of last year’s NBA Finals, the Cavaliers took the floor as The Undertaker’s entrance music played. It’s safe to say: LeBron is a fan of the Undertaker and his craft.

Nearly all of Cleveland’s players met with The Undertaker just before tip-off as he waited outside of their locker room in full costume. However, James isn’t one to accommodate anyone before a game, deciding not to meet the legendary wrestler. “LeBron James isn’t cool with someone purposefully trying to make money or gain fame through him. In other words, no PR stunts that don’t benefit James.”

No official statement regarding James’ absence has been released. When a fan asked Vardon about the failed meeting between the two superstars, his response was clear.

“Here’s a life lesson. If you don’t have an appointment, don’t already know James personally, aren’t a business associate or a small child, the odds of “meeting” James before or after a Cavs game in or near the locker room are not great.”

Obviously, James and his PR department felt that a publicized meeting between the two celebrities would not be in their best interest.