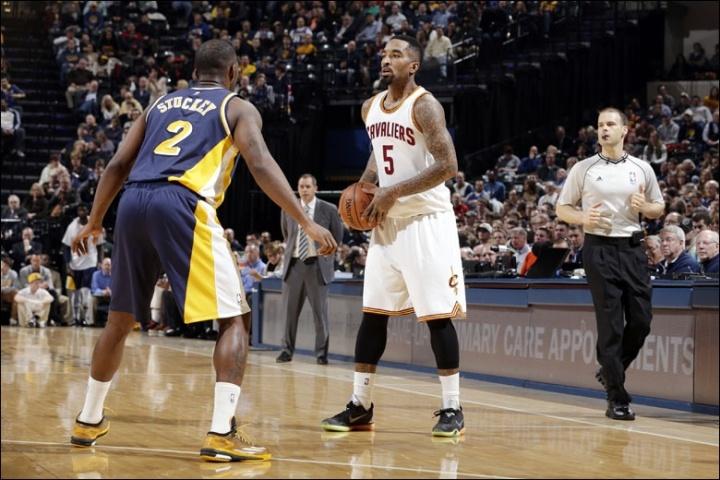 It seemed like the Cavs were on route to another blowout victory over the Pacers tonight during the first quarter. Without LeBron James and Kyrie Irving playing due to injury, it would have been an even more impressive feat. They couldn’t keep it up as Indiana came back and defeated Cleveland 93-86.

Cleveland started out hot up 7-0 and eventually 21-8 as J.R. Smith knocked down three three-point shots in the opening six minutes. Then a mild scoring drought hit as Cleveland was outscored 11-2, bringing the game to 23-19. Cleveland answered right back two shots at the rim by Shumpert and Smith along with a Thompson free throw to take a 28-19 lead after one quarter of play.

The Pacers opened up the second quarter with five quick points. Cleveland kept the lead until there were four minutes remaining in the half. That’s when Indiana used a 10-3 burst to take a 51-45 halftime lead. Indiana outscored Cleveland 32-17 in the second quarter alone.

The third quarter is where it got away from the Cavs despite keeping it close at first. Down four just five minutes into the quarter, Cleveland allowed Indiana to get off a 17-6 run to blow the game open with a 15-point difference with two minutes remaining in the third. By the end of it, Cleveland trailed 61-74 after three quarters.

The Cavs attempted a comeback to start the fourth with a 9-2 scoring run to get within six points. Unfortunately, the Pacers answered back with a nine straight points to regain the momentum and all but put the Cavaliers away. Cleveland tried it again with 11 straight points to trim the deficit to just 81-85, but David West hit a big jumper and George Hill made three key free throws to put the Cavaliers away 93-86. Hill finished with a triple double consisting of 15 points, 10 rebounds, and 12 assists.

J.R. Smith led the Cavs in scoring tonight with 21 points on 7-17 shooting, adding in two rebounds and four assists. Kevin Love put in 17 points, but struggled shooting making 6-19 with 10 rebounds, three assists, two steals, and two blocks. Matthew Dellavedova had 14 points on 5-18 shooting, and Cleveland did not get the bench help they needed this game scoring just 22 points.

Cavs are down to Pacers and Kevin Love has two blocks. His teams are 16-18 in his career when he blocks two shots or more. STOP DEFENDING!

As a team, the Cavs shot a measly 35.9% from the and 31% from the free throw line. They also had 15 turnovers compared to the Pacers’ eight.

Cleveland’s next game is Sunday afternoon against the Houston Rockets, a nationally televised game on ABC. They’ll try to get both James and Irving back as they look to stop James Harden and the Rockets.