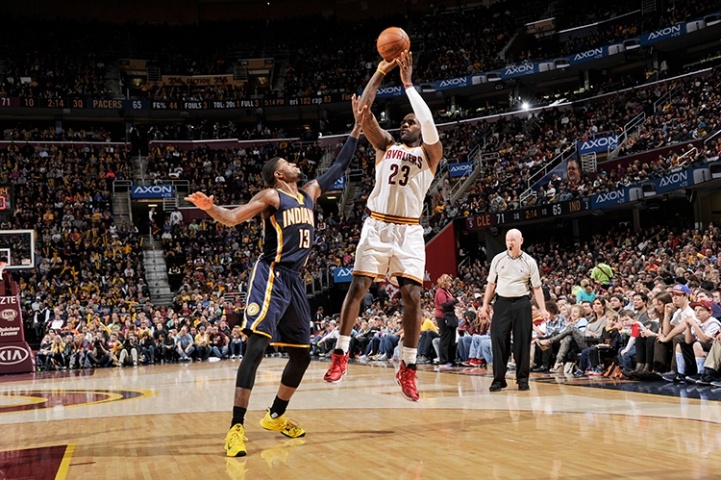 Click “Next” at the bottom of the page to see the highlights from today’s game!

For the first time since the season opener in Chicago, the Cleveland Cavaliers had to manage the fourth quarter in a tightly contested game. The Indiana Pacers brought their grit and new offensive style to Cleveland, but thanks to LeBron James and Kevin Love, the Cavs were able to pull out a 4-point win in the Q. The win was the Cavs’ 6th straight, and improved their record to 6-1 on the season thus far.

The Cavs held the lead after every quarter, but for much of the game the score stayed within a few baskets, with either team holding leads in the first half. The Cavs found their rhythm behind the strong play of Kevin Love. Love had a monster game, with 22 points, 19 rebounds and 3 blocks. Playing probably his best game of the season, the team was visibly better with him on the court. The Cavs were a team high +14 with him on the court, and in a big run in the third quarter that put them up by 11, Love tallied 6 points and 7 rebounds.

Love’s strong play was seemingly matched by LeBron James, who was questionable with a quad injury before the game. He fought through whatever soreness was ailing him, and led the team with 29 points. He also contributed six rebounds and four assists, but if there was any negative aspect of his game it was his free throw shooting. He is shooting just 58% from the line on the season, which is a major issue for a player who plays as aggressively and forces as much contact as he does. He took to Instagram recently to show that he is putting in the time to improve at the line, but was only able to muster a 9-14 performance on Sunday. He did not shy away down the stretch, however. He was 7-8 in the fourth quarter, including 2-2 with five seconds left to seal the win.

The backcourt combination of Mo Williams and Matthew Dellavedova continued to play well in the absence of Kyrie Irving, Iman Shumpert and JR Smith. The play of these two has been one of the quietest success stories of this early season. Against Indiana, the two combined for 15 points, 17 assists, and 8 rebounds. Delly contributed 9 assists off the bench, and has proven that he is capable of playing alongside Williams at the shooting guard position. This lineup gives the Cavs an extra ball handler on the floor, and a very willing passer who keeps the offense in motion.

The Pacers fought hard, with Paul George and Monta Ellis scoring 32 and 25 points respectively. They look like an eastern conference playoff team, but most likely at the bottom half the 8 playoff seeds. George always seems to play well against LeBron, and Ellis is just as dangerous offensively as he has been in the past. Their efforts weren’t enough, though, as the Cavs were able to make the plays at the end of the game to seal the victory.

The Cavs are at home one more time Tuesday night versus the Utah Jazz before they hit the road. Hopefully they’ll be taking a 7-game win streak with them.

Click “Next” to see all of the highlights from today’s game!

Double T comes into the game and immediately gives energy to a team that needed it. Thompson elevates and throws down a one handed alley oop from Delly while getting fouled.

Timofey Mozgov spots up in the corner, and Delly sets him up for his first three pointer as a member of the Cavaliers!

Timofey Mozgov sends the rebound on a good tip out to Matthew Dellavedova, who squares up for the shot before he finds LeBron James cutting baseline. He dishes to LeBron on the alley oop and LeBron’s crazy athleticism helps him adjust and lay the shot in.

Kevin Love comes up with the big defensive block on George Hill’s wide open layup attempt, runs the floor, and then throws in the reverse layup on the fast break.

Watch the Cavs run some plays and hit some clutch shots down the stretch. 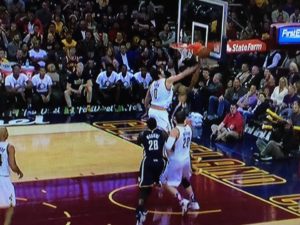