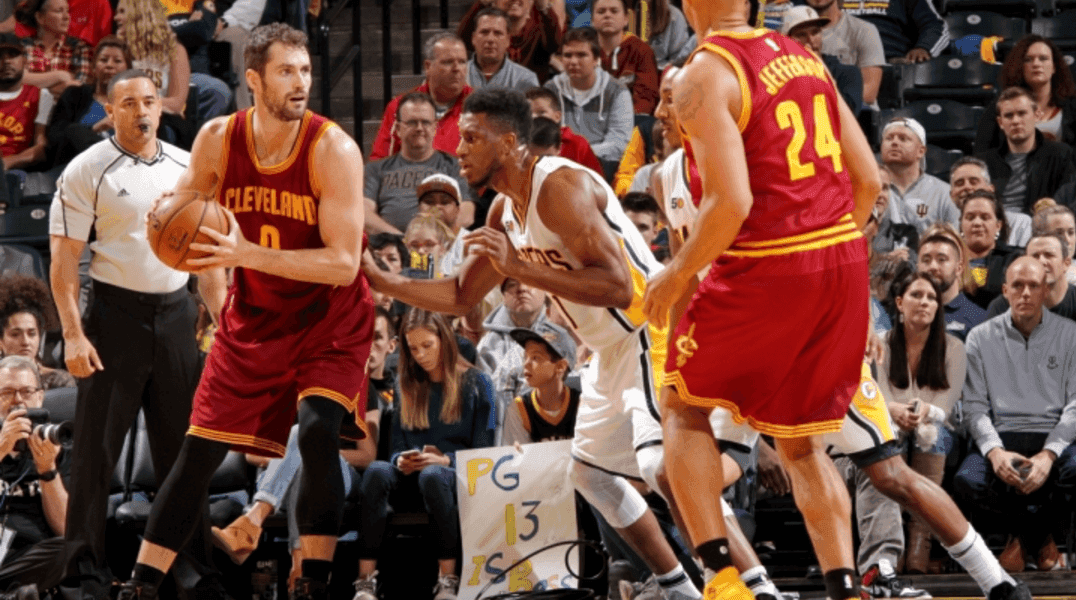 News broke this morning that the Cavaliers coaching staff were going to hold LeBron James back tonight after his big effort last night against Toronto. With JR Smith already sitting out his third straight game, an already tough place to play became an even tougher task against an Indiana Pacers team looking to prove themselves.

The story of the game started early, with the Cavs struggling to find offense and open three pointers like they’re so accustomed to. The Pacers swiftly took advantage, as they poured it on early. After trailing 7-4 early on, the Cavs went on a 9-0 run to go up 13-7, with just under seven minutes left in the first quarter. That would be the only lead they saw on the evening. They gave up the lead with six straight misses, and the Pacers took advantage going up by 10 with two minutes left. Jordan McRae, Kay Felder, Chris Anderson and Deandre Liggins were inserted into the game for some big NBA minutes, and with both Felder and McRae scoring instantly, the lead was momentarily cut before a baseline jumper from CJ Miles lifted the Pacers to an 11 point lead. Pacers finish the quarter on a big run and go up 30-19 after one.

Kevin Love and Kyrie Irving begun to stamp their mark on the contest in the attempt to cut the lead, and they were successful in the second period. With Irving, McRae, Liggins, Anderson and Frye to start the quarter, Irving took it upon himself to carry the offensive load. A couple of flurries to the basket as well as Love re-entering the game and getting back to work, Irving and Love combined for 18 of the Cavs 28 points in the middle of the second quarter. The Cavs went on a big 12-3 run, and with an Irving jumper and a corner three from Love, all of a sudden the Cavs found themselves down only two. Irving had nine points in the quarter, but a sequence of bad shots encouraged a quick response from Indiana, which pushed the lead back up to 11. The Cavs tried to fight through it, and an 8-0 run which included two threes and a rare baseline jumper from Deandre Liggins saw the Pacers hold just a one point advantage. However, another poor end to the quarter was the Cavs kryptonite all night long, and the Cavs give up and easy bucket to Paul George and a three point play for Myles Turner handing the Pacers a five point lead at halftime, 50-45.

After the break, the Cavs took to the floor with Iman Shumpert, Kyrie Irving, Kevin Love, Richard Jefferson and Tristan Thompson. They started sloppy, and their shooting was affected as they went 4/15 from downtown. Another run put together by the Cavs with a three pointer by Jefferson got the lead down to as low as 4, but careless turnovers continued to plague the Cavaliers as then went into the fourth period trailing by 12, the largest lead of the game. Irving and Love were doing all they could, as they combined for 45 of the 68 total Cavaliers points. Pacers up 80-68 after three.

Love and Irving had played heavy minutes before the start of the fourth, so the Cavs looked to Felder, McRae, Thompson, Frye and Liggins to keep them afloat until Irving and Love could return. They did an admirable job, and Irving re-entered the game making an instant impact. A jumper from the top of the key cut the lead to just four, but it was as close as the Cavs would get. They couldn’t execute in the final period and Indiana cruised to victory, opening up their largest lead of the game and sealing the victory.

High men for the Cavs were Kevin Love with 27 and 16 rebounds, Kyrie Irving had 24 points, Channing Frye had eight points, and Jordan McRae and Kay Felder had nine points each off the bench.

It was going to be a tall order taking down the Pacers on their home floor without James and Smith, but nevertheless, it was a disappointing loss for the Cavs. They need to continue to pick up wins when James rests. If not, dropping winnable games will impact their quest of securing the number one overall seed in the eastern conference.

The Cavs are now 9-2 on the season, and travel back home to take on the Detroit Pistons on Friday.