FULL HIGHLIGHTS: Cavs Remain Winless In Preseason After A Crushing Loss To Pacers 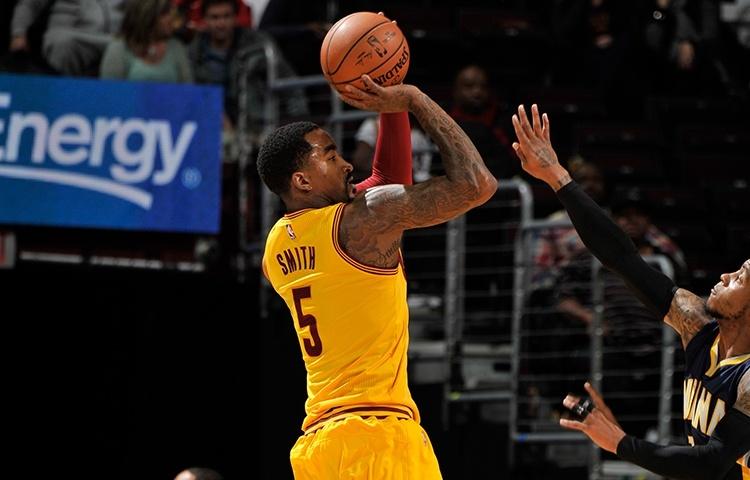 The Cleveland Cavaliers welcomed Timofey Mozgov and J.R. Smith back into the fold in their preseason battle with the Indiana Pacers. The team went up against Paul George, Monta Ellis, and George Hill sans LeBron James who sat out the game as part of his planned rests and also Matthew Dellavedova.

The Pacers started the festivities with a 7-2 run while James Jones and Richard Jefferson had a triple each to announce the Cavaliers’ presence. The ball was very active on Indiana’s end as they blazed to a 24-8 lead via a 15-0 run. The Cavaliers relied too much on jumpers until Richard Jefferson stopped the drought with a hard drive to the basket.

Anderson Varejao went on to score six straight points as the first quarter ended up at 28-16 for the visiting team. The Pacers assisted on seven of their 10 field goals while the Cavs turned the ball over eight times.

The Cavaliers started the second quarter with poor shooting as they found themselves behind, 38-19. The Pacers then erected the biggest lead of the game at 20 off a Paul George three-ball with four minutes left in the first half. Richard Jefferson brought some life back to The Q with a massive throwdown over Jordan Hill. After electing to be a facilitator for most of the half, J.R. Smith finally made his presence felt by canning a basket from beyond the arc.

The first half ended with Indiana leading Cleveland, 53-38. Monta Ellis led their attack with 11 points while Anderson Varejao and Richard Jefferson shared the scoring lead for the Cavs with 9 apiece.

A lob from J.R. Smith to Timofey Mozgov started the third quarter scoring for both teams but the Pacers went back to their relentless ways en route to a 60-42 score. As they have done all game long, the Cavaliers often looked for Mozgov at the post to begin their offense they managed to pick it up in the middle of the quarter as they cut the lead down to 12. Indiana then capitalized on their free throw opportunities to bring back their lead to 20, 72-52. The third quarter ended at 73-58 in favor of the visitors.

The Pacers started the fourth quarter scoring, jumping to 19 point lead. The Cavaliers turned to idle play and it lead to their biggest deficit of 21 points at the seven-minute mark of the final period. By that time, the rotation players have rested for Cleveland with the exception of Timofey Mozgov. Both the Cavaliers and Pacers opted to finish the game with their shock troopers.

Indiana wins this one, 107-85, as Cleveland continues to be winless in the preseason. Paul George led the scoring for the Pacers with 17 while Timofey Mozgov had 16 to pace the Cavaliers.

Mo Williams was brought in this season as a veteran leader for the Cavs, but he’s still got a bit of flash to his game. Mo drives baseline and zips a behind the back bounce pass into Richard Jefferson’s shooting pocket. Jefferson elevates and hits the three.

J.R. Smith is known for his streaky shooting ability, but he also knows how to dish the rock. Smith finds Anderson Varejao twice in the first quarter for a pair of buckets.

Richard Jefferson misses the three, but Mo Williams comes up with the loose ball rebound and dishes to the cutting Jefferson for the tomahawk throwdown over Jordan Hill.

J.R. Smith catches the ball in the corner, drives towards the free throw line, and crosses Paul George over, making him fall in the process, and hits the jumper to complete the beautiful play.