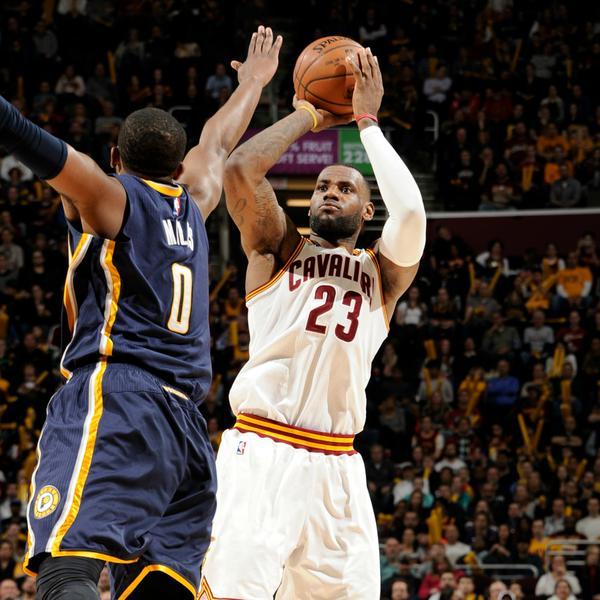 The Cleveland Cavaliers defeated the Indiana Pacers Friday night 95 92 led by LeBron James’ 29 points, including 13 in the fourth quarter. The Cavs now move to 45-26, putting them a couple games over the Toronto Raptors and Chicago Bulls for second in the East while also securing their frist playoff berth since 2010. Cleveland, which has now won 15 straight games at home, was able to make the final run in the fourth quarter and iced the game with two J.R. Smith free-throws.

It was a slow start to the game as both teams had a combined 20 points halfway through the first quarter with Cleveland up 11-9. The Cavs used a 13-0 run to take an 18-9 lead. Led by seven points from Kyrie Irving and six from Timofey Mozgov, the Cavs took a 25-20 lead after one quarter of play.

Roy Hibbert helped the Pacers offensively in the second quarter as they cut into the Cavalier lead after trailing by 10 in the opening minute of the second quarter. Both teams exchanged baskets to end the half and Cleveland led 45-42 after two. Forward David West left the game after 12 minutes with an illness and did not return.

The Cavs scored the third quarter’s first nine points to take a 54-43 lead, but Indiana came storming back with a 16-2 run right due in large part to the sharp shooting of George Hill. Actually, the third quarter belonged to Hill as he scored 14 points to help keep the depleted Pacers afloat and tie the game up with the Cavs at 72 apiece going into the fourth.

LeBron James came alive in the fourth quarter, which started out with Matthew Dellavedova hitting two big three-pointers. LeBron would score 13 fourth quarter points, including 10 straight at one point to keep the Cavs ahead. After a C.J. Miles three-pointer gave the Pacers a 92-91 lead, LeBron scored on a floater in the lane to give Cleveland the lead for good. The final possession for the Cavs was not a good one, as LeBron almost coughed up the ball, but Iman Shumpert chased down a bad miss by James. J.R. Smith knocked down two free-throws to ice the game for Cleveland.

LeBron James led the Cavs tonight with 29 points, seven rebounds, and five assists. Kyrie Irving had 13 points, but struggled shooting just 4-16 from the field and jsut 1-4 from downtown. Timofey Mozgov had 12 points and eight rebounds, while Kevin Love and J.R. Smith had 11 apiece. Love had a double-double with 11 points and 13 rebounds.

The Cavs bench was rather quiet today with Dellavedova having 11 points and no one else scoring more than 4. As a team, Cleveland shot 42.7% from the field, 34.6% from three, and hauled in 45 rebounds to the Pacers’ 42.

J.R. Smith crosses over multiple times outside the three point line, before drviing to the basket. After two dribbles and when inside the three-point arc, Smith goes between the legs and steps back for the sweet jumper!