Cavs owner Dan Gilbert will give championship rings to over 1,000 employees

The Cavs enjoyed an epic ride to an NBA Championship this past season, and the fans as well as the players cannot wait until ring night at Quicken Loans Arena on October 25th.

According to Joe Vardon of Cleveland.com, there’s now more excitement around the Q with the news that owner Dan Gilbert will be giving out championship rings to the entire Cavaliers organization as well as Quicken Loans Arena employees. That included full-time and part-time employees.

That means that over 1,000 employees will be receiving championship rings from the team. Vardon adds that the rings won’t be the exact same diamond rings the players will receive, but they will be some sweet rings.

Vardon adds that a conservative amount spent on the rings is over $1 million. For a billionaire like Gilbert, it’s not much, but it’s still an incredible gesture and shows just how much winning this title meant to everyone in Cleveland.

Aside from the employees, there are reports that both Warriors center Anderson Varejao and Turkish head coach David Blatt have been offered championship rings. However, there’s no definitive report on whether they’ll accept or reject the rings. 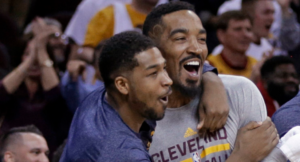