The Eastern Conference champion Cleveland Cavaliers have been fairly quite this offseason, but they did manage to make a few moves. First, the Cavs re-signed veteran sharpshooter Kyle Korver to a three-year, $22 million contract. Shortly after that deal was struck, point guard José Calderón was signed to a one-year, $2.3 million veteran’s minimum contract to serve as Kyrie Irving‘s backup. Calderón, 35, was officially welcomed to the team earlier this week. Now, it’s Jeff Green‘s turn.

Welcome to The Land, @unclejeffgreen!

Like Calderón, Green, a 30-year-old swingman by trade, also signed a one-year deal worth $2.3 million. While most basketball fans will remember Green from his days with the Boston Celtics, the former Big East Player of the Year will now be looking to make a name for himself in Cleveland.

Green’s story is unique in its own right. In 2012, he underwent successful surgery at Cleveland Clinic to repair an aortic root aneurysm. From that day forward, Green has held a special place in his heart for the hospital and its staff.

Over the course of his career in the NBA, Green has racked up averages of 13.5 points, 4.7 rebounds, and 1.6 assists per game. However, the former Georgetown Hoya saw a bit of a drop in his production last season, as he averaged 9.2 points on 39.4 percent shooting from the field (27.5 percent from beyond the arc), 3.1 rebounds, and 1.2 assists.

Join us in welcoming Green to The Land. 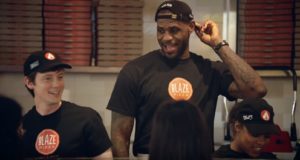