In a snap, the balance of power in the Eastern Conference appears to be bound for a change following the earth-shaking trade that happened Tuesday night, when the Boston Celtics sent a package deal fronted by Isaiah Thomas to the Cleveland Cavaliers in exchange for Kyrie Irving.

Well, not so on the betting boards, where the futures odds for the Celtics and the Cavs to win the NBA championship next season remain unchanged as highlighted by Jeff Sherman of Westgate Las Vegas sportsbook

It’s still too early to assess how the betting public would respond in the wake of this blockbuster deal in the NBA. But for now, there seems to be not enough action for bookies to move the needle.

By the looks of it, Cleveland is still the favorite to win the Eastern Conference title but the Celtics are rightfully behind LeBron James and crew, especially with how Ainge reshaped the team’s roster this summer by winning the Gordon Hayward sweepstakes and bringing over Irving to Beantown even if it meant dealing away the Celtics’ top scorer last season in Thomas and a versatile, scrappy forward in Jae Crowder. 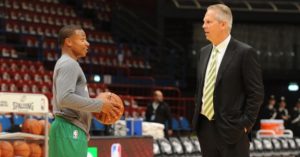