The Cavaliers ended their four game Western Conference road trip with a 93-87 victory over the Denver Nuggets on Tuesday night. The win moved Cleveland to a record of 21-9 while they still reign at the top of the Eastern Conference. For Denver, they fall to 12-20 on the season. The main storyline from tonight’s game is that Kyrie Irving stated beforehand that his hope is that this is the last game he sits out this season. LeBron James was the Cavs leading scorer tonight, as he did not get a lot of help from his teammates. Will Barton led the way for Denver tonight finishing with 29 points.

Cleveland dropped the first two games on their road trip, but managed to finish strong winning the second two. Their shooting in Golden State and Portland was atrocious, as they could not buy a bucket. They definitely cleaned it up by shooting 46 percent against Phoenix and 44 percent tonight against Denver. The game was never out of reach for the Nuggets as they were only down 53-42 at half, but they were just never fully able to catch up to Cleveland. They were still down 11 points with a minute left in the game, but a couple of garbage time baskets cut their deficit to six.

As mentioned above, James led the Cavaliers in points finishing with 34 on 54 percent shooting. Additionally, he grabbed six rebounds and only dished out two assists. Late in the fourth quarter he left the crowd in awe with a reverse slam dunk off an Iman Shumpert steal. He carried the team because only two other players scored in double figures and they were Shumpert with 16 and J.R. Smith with 11. Kevin Love grabbed a game-high 14 rebounds, which was much needed due to his poor shooting performance. He only managed to score eight points and his shooting percentage was an awful 25 percent.

Barton had an outstanding game as he kept this game fairly close for Denver. He had two assists and seven rebounds to go with his 29 points. Three other players scored double figures for Denver. Joffrey Lauvergne finished with 14, guard Gary Harris added 12, and Nikola Jokic dropped 10. Although at home, the Nuggets had the disadvantage from the free throw line. Cleveland had 11 more free throw attempts than Denver, which is very unusual to see because it is usually the home team that gets more calls to go in their favor.

After playing four games in five nights, Cleveland gets three days of rest before their next game, which is back at the Q against the Orlando Magic on Saturday night. Tip-off is set for 7:30 p.m. Tonight’s game was the first of a back-to-back for Denver. They will travel to Portland tomorrow night to take on the Trail Blazers. Both teams boast a similar record and the game will be broadcasted on NBA TV at 10:00 p.m. Eastern time. 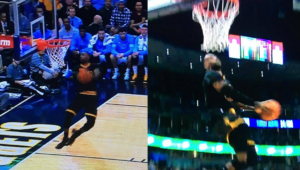