It wasn’t even 24 hours after the Cleveland Cavaliers lost to the Golden State Warriors, and they were already back preparing for the draft, this time bringing in Alabama guard Collin Sexton in for a workout.

No rest for the weary: With the Cavs’ season ending in a Finals sweep on Friday, the front office hosted a draft workout for Alabama guard Collin Sexton on Saturday, league sources tell ESPN.

The Cleveland Cavaliers currently own the eight pick in the draft. They received that in the trade that sent Kyrie Irving to the Boston Celtics.

Sexton was the SEC freshman of the year during this past season and he lived up to the expectations that were brought with him out of high school. Sexton averaged 19.2 points and 3.6 assists per game last year for the Crimson Tide. On most draft boards, he is expected to be picked as a mid to late lottery pick.

What the Cavaliers are going to do with the draft pick is still up in the air and there still seems to be a lot of options left on the table, and most of them revolve around what LeBron James is going to do this offseason.

If the Cavs think that James is going to stay, there is a good chance they will trade the pick for an established player that can contribute right away. Kemba Walker is a name that has been floated around in the rumor mill.

If the Cavs think that James is going to leave they will probably go best available player left on their big board as they start a rebuild. If this is the case there is also a good chance they could try to get rid of Kevin Love on draft night. 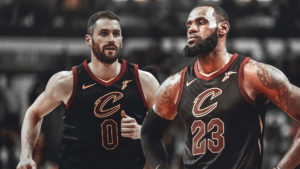