LeBron James of the Cleveland Cavaliers has been compared to Michael Jordan more and more in recent years. The arguments are aplenty, and some of them may be invalid.

Some of them, however, are very valid. It’s those viewpoints that make the debate interesting. Is James really better than Jordan? Is the conversation even fair to have? Will Jordan’s championship record be the thing that prevails in perpetuity?

Until James retires and people can look at his career in the proper context, none of these questions can be answered. But don’t tell that to former player Brian Scalabrine. He had some opinions about it in a video shared by Yahoo Sports.

“How bout locking Kevin Durant up? How bout showing us your dominance on both ends of the floor? I want you to rebound, I want you to get double-figure assists,  I want you to score 35-plus, and I want you to lock up KD. And then maybe I’ll put you in that Jordan category, which everybody seems to be talking about and chasing this ghost.”

Scalabrine is talking about Game 3 of the NBA Finals, and what he wants to see from James so the Cavaliers don’t get swept by the Golden State Warriors. While the former Boston Celtics player does have a point in terms of how James likely needs to play in order for the team to win against the Warriors.

But the idea that one game will define whether or not James is better than Jordan is one of those silly arguments.

View his full comments below.

Why LeBron needs to prove he's a legit two-way player before @Scalabrine puts him in the Jordan conversation. https://t.co/mBHsZEzMP4 pic.twitter.com/8hyTDpv632 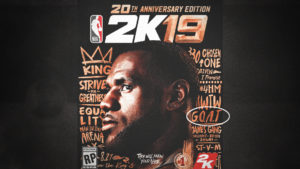