One Western Conference exec who spoke to David Aldridge of The Athletic thinks Love doesn’t have a lot of value, which means the Cavs might not get a big return for the All-Star big man if they decide to move him before the February trade deadline.

“I don’t think Kevin Love has a lot of value,” a Western Conference executive said Monday. “The contract is obvious, but you know he is going to miss games with the toll on his body… I don’t see teams taking Kevin on (without) at least taking back a first-round draft pick or multiple seconds.” 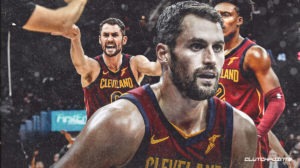 JUST IN: Kevin Love will rest vs. Clippers, but Larry Nance Jr. is back
Related TopicsCavaliersKevin Love