Despite having a bevy of guards on the roster, Cleveland Cavaliers head coach Tyronn Lue says he will find extended minutes for Cavs newcomer David Nwaba. The Cavs have George Hill, J.R. Smith, Collin Sexton, Kyle Korver, Rodney Hood and Jordan Clarkson on the team.

Nwaba signed a one-year, $1.5 million free agent deal with the Cavs in the offseason. He spent last season with the Chicago Bulls. The Bulls rescinded the qualifying offer on Nwaba, making him an unrestricted free agent.

#Cavs Ty Lue says he sees David Nwaba as part of his rotation. I asked him how that's possible when he has so many other guards. He said, "I will show you." I said, "Can you tell me instead?" He said, "You're smart so you will figure it out." So there's that…

The 6-foot-4, 209-pound Nwaba has played in 90 career games in the NBA with the Bulls and Los Angeles Lakers. He holds averages of 7.5 points, 4.3 rebounds and 1.3 assists. Nwaba is a rugged defender and good slasher. He uses his upper body strength to absorb contact in the paint and is an above average finisher at the rim. He’s not a household name in the league, but for $1.5 million, the Cavs got a steal in Nwaba.

The biggest aspect Nwaba has to improve is his 3-point shooting. He only attempted 52 shots from distance last season, connecting on 18. The Cavs, though, didn’t bring Nwaba for his perimeter shooting. His defense, hustle, off-ball movement, and intangibles are things Cleveland fans will appreciate from Nwaba. 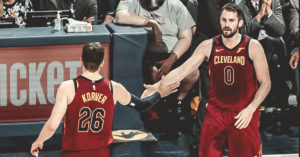