Cleveland Cavaliers forward LeBron James is undoubtedly one of the biggest stars in the NBA today. Despite already being in his 15th season in the league, the Cavs star remains as the standard of excellence for all players, as he continues to play at a very high level, showing no signs of slowing down anytime soon.

However, many have noticed that he is not receiving a lot of calls in his favor, including his teammate, Tristan Thompson, and his head coach, Tyronn Lue.

The two recently spoke about it, and the 6-foot-10 big man made it known that because James is very strong, referees tend to see him exaggerate on some contact he receives while attacking the basket. Lue even called James the “Shaq of guards” which echoes the statement Thompson said, according to Dave Mcmenamin of ESPN.

“I mean, he attacks the rim a lot, so it’s up to the ref. It’s on them to make the calls,” Thompson said. “I think, with him being so strong and athletic, just because he’s bigger and stronger than everyone, doesn’t mean it (should not be) a foul. I think he gets fouled more than anyone in this league, and he gets hit, but people kind of take advantage of the fact that he’s 280 (pounds) and he’s a freight train. But if a guy gets hit, you got to call the foul. But that’s just my personal opinion.”

Now at 33 years old, James is still quite a physical specimen, which goes to show the premium he’s placed on his conditioning and health. He continues to be in very good shape, which is the key to him having the ability to be effective in different ways on the court.

With the playoffs nearing, Thompson and Lue’s comments could also be considered a plea to the referees to look closer at the defenders trying to stop James. Maybe it’s high time to reconsider if the Cavs superstar is indeed getting the far end of the stick when it comes to how officials see defenders play him. 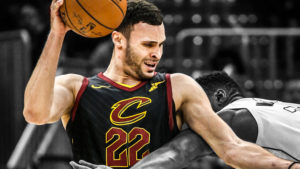