Former Cavs head coach Tyronn Lue recently talked to Joe Vardon of The Athletic as part of a wide-ranging interview that featured Lue expressing his wish that he was still in Cleveland. During the discussion, Lue touched on an enduring moment he shared with LeBron James in Game 7 the 2016 NBA Finals.

Rightfully so, tales of the Cavs’ championship run in 2016 are still told to this day, especially in Northeast Ohio. For the first time in 52 years, the city had a title. However, there is a story from that series that is often untold — one that includes a locker room outburst from James.

The series is tied at three games apiece and the Warriors are leading the Cavs by seven points at halftime. Draymond Green, a player who appeared to be on his way to Finals MVP status, was imposing his will on James.

Despite the fact that James was laying it all on the line, leading the Cavs in scoring, Lue came to him at halftime and asked him to “be better” in order to turn things around:

“You gotta guard Draymond Green, stop turning the ball over, be aggressive, shoot the ball, be aggressive,” Lue said. “And I walked into the coach’s office. And this is what everybody told me. He grabbed (Damon Jones) and said, ‘Man, your boy’s trippin.’ And D. Jones said, ‘I’ve been in the G League, I haven’t been here all year, but everything I read in the paper about how much you trust T. Lue, how much you love T. Lue as a coach, why not trust him now?’”

This request from Lue apparently rubbed James the wrong way. As the story goes, LeBron hurled a few choice words in the Cavs coach’s direction and was ready to storm out of the locker room:

Lue continued, saying LeBron said to Jones, “’F*ck that’” and was ready to storm out. But before LeBron left, he found teammate James Jones and logged the same complaint to him. “Well, ’Bron, is he lying?” James Jones said, according to Lue. “F*ck you, too,” LeBron yelled back.

James, one of the fiercest competitors in this galaxy, took Lue’s halftime challenge to heart. Both angry and motivated, LeBron was the first player back on the court for the Cavs. He played much better in the final two quarters and later came to grips with Lue’s message:

“And then he went out and dominated the second half,” Lue said. “After the game, ’Bron said to me, ‘You know how to push my buttons, don’t you?’”

“Yeah, motherf***er,” he responded to LeBron.

James finished with 27 points, 11 assists and 11 rebounds. He also had three blocked shots, including one of the chase-down variety in the closing minutes to help the Cavs secure the title. The Akron native fell to the floor when the final horn blew, knowing that he had delivered on the promise he made to his hometown:

LeBron James of the Cleveland Cavaliers makes a stunning chase-down block in the final minutes of Game 7 of the 2016 NBA Finals. James would later call it the most important play of his career. pic.twitter.com/0tktGhrMmS

Green racked up 32 points, 15 rebounds and nine assists, but the Warriors’ record-setting season ended without a title thanks to the Cavs’ heroics.

In the end, Lue’s direct message seemed to be exactly what James needed to hear. Honest assessment can be tough to take for great players, but even the brightest stars need moments of darkness to shine. 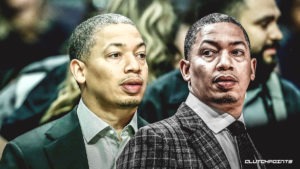