Schroder, one of the quickest ball-handlers in today’s NBA, was giving the Cavs headaches in the first half, scoring 17 points with relative ease. However, when James opted to take on the responsibility of guarding Schroder, things changed. In fact, the King held Schroder to just ten points in the final two quarters of play. Cavs head coach Tyronn Lue later said that James’ defense of Schroder was “one of the best performances I’ve seen all year.”

How did James manage to stay in front of Schroder, though?

“I know pros and cons of every player on every team, of what they like to do, what they (don’t) like to do on a possession and then I just use my intelligence on that and I live with the results,” James said.

“Anytime you’re covering a small guy like that who’s very fast, that’s very challenging,” James continued. “He’s very shifty, his right to left crossover, his left to right crossover. Once he gets a hip on you he does a great job of keeping you there and finishing at the rim. Which you saw a lot in the second quarter, where he just kept getting bucket after bucket.”

With time ticking away in the fourth quarter and his team leading by six points, James, now in his 15th season of NBA service with no signs of regression, put a stop to Atlanta’s hopes of a come-back by emphatically rejecting Schroder’s driving lay-up attempt.

“The prior possession (Schroder) threw it high off the glass and I couldn’t go get it,” James said. “But I was right there, made him take a tough shot, but he’s a great finisher. On the second one I just tried to stay body to body and I was able to get my hand on the ball a little bit before he was able to rise and it allowed me to go up and just pin it on the backboard.”

James and the Cavs, now winners of ten consecutive games (longest active streak in the NBA), will be back in action on Saturday night, when they’ll host the Memphis Grizzlies inside Quicken Loans Arena. Tip-off is scheduled for 7:30 p.m. EST with Fox Sports Ohio and Fox Sports Southeast having live broadcast coverage. 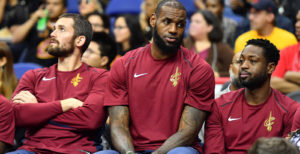