Tyronn Lue on what LeBron James meant to Cleveland The first time LeBron James left the Cleveland Cavaliers to join the Miami Heat there was a lot of hard feelings by both the fans and people inside the organization. James bolted again this offseason joining the Los Angeles Lakers, but this time the feelings seem different from inside the organization. Cavs Owner Dan Gilbert thanked James for delivering on his promise, and when Tyronn Lue was asked about James times with the Cavs all he did was praise him.

“It’s tough because he meant so much to me as a coach, especially our players in the organization and the city of Cleveland,” Lue said via ESPN. “But he’s the one guy that throughout the whole course of his career came in with the most pressure and the most scrutiny. Nobody else has done that. And from day one, he never cracked. He continued to get better and better and do so much for the city of Cleveland and the league. So I’m just glad that he had an opportunity to do what he wants, to enjoy it, his family and the rest of his career.”

James leaving is a good opportunity for some of the players on the Cavs, but it might actually be best for Lue. Since becoming the coach Lue has always had to meet the demands of LeBron, and now is a good chance to really put his stamp on the team.

He is going to get a good chance to help develop some of the young guys and try to get this team back into a contender, even without James. 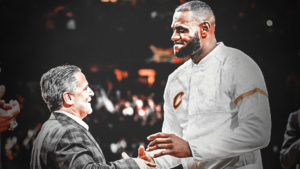