The Tristan Thompson and Khloe Kardashian storyline continues to develop as Kardashian was seen returning to Cleveland to reunite with Thompson after rumors swirled that the couple had finally split for good.

Per US Magazine, the youngest of the three Kardashians was greeted with silver “welcome home” balloons from Thompson when she got back to Cleveland after a trip to Indonesia.

Their drama has been well publicized in the past few months, as Thompson was caught red-handed on video with several other women and leaving nightclubs with female company.

Apparently, the two have reconciled and Khloe is planning on moving back to Cleveland full-time.

Thompson and the Cavs have gotten off to a rough start, which was expected after the departure of LeBron James. The 0-6 start led to the dismissal of head coach Tyronn Lue, as well as other members of the coaching staff.

The power forward has been mediocre through the Cavs’ first six games. He has averaged 7.0 points and 8.7 rebounds while shooting 46.5 percent from the floor to start the season.

While it is not all Thompson’s fault, the Cavs have looked like a complete mess throughout their first six games.

They were blown out by the Atlanta Hawks on their own home floor and then soundly beat by the Brooklyn Nets in their next game. Both these teams are expected to finish outside of the playoff standings even in a soft Eastern Conference, and Cavs fans must be alarmed to see their team badly lose games to weak teams.

While Thompson might have cleaned up his act off the court, he’ll need to step up significantly if the Cavs want to be taken seriously this season. 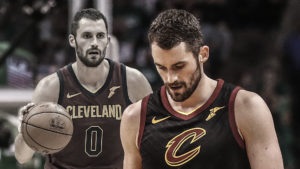