It has been a rough NBA Finals series for the Cleveland Cavaliers, as they are yet to win one against the Golden State Warriors. While they are the heavy underdogs to win in the finals, they were at least expected by many prior to the series to at least notch a victory. Through three games, they have not been able to do that. Surely, it’s not easy for the Cavs to hit the sack and sleep over their struggles. Not if you’re Tristan Thompson, however.

According to Melissa Rohlin of The Mercury News, Thompson said that it helps him relax at home after a game after a physical contest.

Tristan Thompson after I asked him about the double techs: “It helps me sleep better when it’s physical.”

Tristan Thompson and his rival, Draymond Green, were both slapped with technical fouls Wednesday night early in Game 3 of the series after the two had been jawing at each other. It’s more of a verbal altercation more than a physical one, but Thompson could also be referring to the countless battles he’s having underneath the glass for rebounds and at the post with Green.

So far, Green is winning the matchup. Not only is his team a win away this Friday from taking out the brooms and sweeping the Cavs, he’s also posting much better numbers than Thompson.

Green is averaging 9.3 points, 7.0 rebounds, and 8.3 assists so far in the finals. Thompson, on the other hand, has been churning out 7.0 points and 5.7 rebounds in the series.

Thompson is going to have plenty of time to sleep if the Cavs went on to lose this Friday at home. 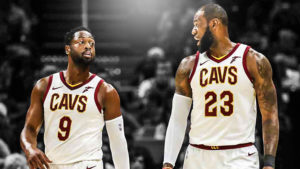