Per Spencer Davies of Basketball Insiders, the Cleveland Cavaliers are very close to bringing back center Tristan Thompson and guard Rodney Hood — both starters for the Cavs throughout the season — back from injury. However, they both will have to participate in a full practice before receiving any minutes in the rotation, Cavs head coach Larry Drew told the media.

Drew says #Cavs would like to put Tristan Thompson and Rodney Hood through a full practice before bringing them back. "Neck-in-neck" for who is closer to return.

Hood has played in 32 games this season for the Cavaliers. Now in his fifth NBA season, he has a history of being a bit injury-prone, so it will be interesting to see if this injury will have a long-term impact on his overall health.

Hood, who has started at both shooting guard and small forward this season, is a very vital part of Drew’s rotation and will likely play a large part in Cleveland’s future going forward.

Thompson, on the other hand, has only played 27 games for the Cavaliers. He’s still the Cavs starting center and will likely be brought back slowly. He’s been with the team since being drafted by them in 2012 and is much appreciated by Cavs fans everywhere.

This season, Thompson has averaged 12.0 points, 11.6 rebounds, and 2.1 assists per game while shooting a pretty healthy 55.1 percent from the field. Before he was sidelined with a sprained foot, he was having a rebound season after a poor 2017-18 campaign.

The Cavaliers would love to have both veterans back for the long run.

The Cavaliers are 8-29 this season and currently sit in the 15th spot of the NBA’s Eastern Conference. They will face off next against the Miami Heat at home this upcoming Wednesday. 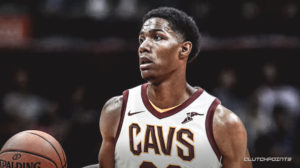