Cavs center Tristan Thompson has heard his name tossed about in trade discussions for years, yet he has remained with the team. The Ontario native opened up about these rumors in a recent one-on-one interview with Sam Amico of Sports Illustrated.

Amico: With an expiring contract, you’re likely to hear your name mentioned in trade rumors most of the season. How do you intend to handle that?

Thompson: My whole goal is just to be professional every day. The only thing I’m going to focus on is, “How can I help the Cavaliers be a better team today?” I’ve been here the longest. We’ve had some success and put a (championship) banner in the arena. I am focused on being the best Tristan Thompson I can be. All the business of basketball and all the speculation is just part of the game. It will be like that from now until you’re done playing. So you just control what you can control — and that’s your effort on the court and being a professional.

Thompson has become a beloved member of the Cavs family. Cleveland selected the 28-year-old with the No. 4 overall pick in the 2011 NBA Draft, and he’s one of the last remaining vestiges of the team’s championship-winning squad from 2016. He’d likely be content to ride off into a Wine and Gold sunset, but he knows the NBA is a business.

Amico: Do you still want to be here?

Thompson: I got drafted here and I won a championship here. I have great memories here. I am a member of the Cleveland Cavaliers and it is my job to punch the clock and come to work every day for the organization. That is how I approach it. There are people who get paid for the business side — (agent) Rich Paul and (Cavs general manager) Koby Altman and others. That business stuff is all for them. For me, it’s about just being a player. You know? Don’t overstep your boundaries. Just play basketball, and let the guys you pay to be businessmen do their jobs.

Whether or not Thompson will be traded this season remains to be seen. For now, it sounds like he’s focused on the task at hand, which is helping the Cavs through a rebuilding phase. 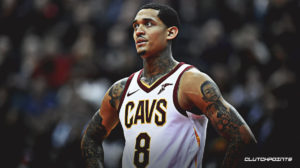