Nestled in the San Fernando Valley of Los Angeles, the modern farmhouse-style residence was built in 2018 and offers seven bedrooms and seven-and-a-half bathrooms within its 9864 square feet of living space.

The stunning property also features a gourmet kitchen, a formal living room that was recently redone by designer Ryan Saghian and an opulent master suite with its own wine cooler and dual bathrooms and closets.

In addition to the main home, Tristan Thompson’s pad also boasts a 1,580 square-foot guesthouse with two bedrooms, one bathroom, and its own kitchenette.

Described in the listing as a “backyard oasis,” the outdoor area is complete with an open-air kitchen, fire pit with built-in seating, bar, and pool with a spa.

Thompson appeared in 57 games for the Cavs in 2019-20. He averaged 12.0 points, 10.1 rebounds and 2.1 assists. The Cavs weren’t invited to Orlando, Florida for the season’s restart since they had the worst record in the Eastern Conference before the season was suspended in March due to COVID-19.

Thompson may have played his last game for the Cavs since he’s a veteran player near the end of his career and Cleveland is in the beginning stages of a rebuild. With that said, it will be interesting to see what team Thompson is playing for next season.

Since getting drafted by the Cavs in 2011 as the fourth overall pick out of Texas, Thompson has compiled regular-season averages of 9.4 points and 8.7 rebounds. He won the 2016 championship with LeBron James, Kyrie Irving and Kevin Love when the Cavs defeated the Golden State Warriors in seven epic games. 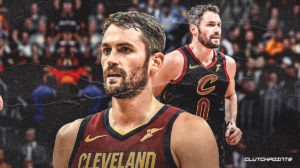