Times are tough in Cleveland. The Cavaliers stink, an anonymous source said that the players are tuning out head coach John Beilein and on Thursday night, big man Tristan Thompson got into a heated exchange with Beilein against the San Antonio Spurs that resulted in the veteran getting benched.

But apparently, Thompson and Beilein are just fine.

“Those things are going to happen in a game from time to time,” Beilein said on Friday, according to Chris Fedor of The Cleveland Plain Dealer. “It wasn’t anything, it wasn’t really … we moved on from it very quickly. He’s contrite about what happened, and he’s been such a team guy all year long. It’s over and done with.”

The shouting match occurred in the third quarter after Thompson threw down a dunk in transition. The Spurs called timeout, and as the Cavaliers players were making their way toward the bench, Thompson began mouthing off and had to be restrained by teammate Matthew Dellavedova.

“There was a lot going on in the game and I think I was just frustrated and voicing my frustration,” Thompson said. “Obviously, camera and media is going to make it bigger than it actually is. Me and coach talked about it and we’re good. He understands my passion for the game. I understand his passion for the game. It’s just family members getting into a quick discussion. It happens like anything. We’ve moved on.”

Thompson insisted that he wasn’t mad at Beilein, stating that he was “just frustrated with how the game was going.”

Given how poorly the Cavs have played all season, you can understand Thompson’s frustration.

The 28-year-old is in the final year of his deal and has been mentioned as a player who could possibly get traded between now and the deadline. 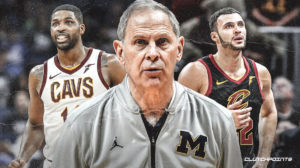