Unexpectedly, Tristan Thompson of the Cleveland Cavaliers is the most-searched athlete in the world in 2018.

As per Sports Illustrated, Thompson topped former teammate LeBron James as the most searched athlete in Google this year.

According to Google's Year in Search, the world's most searched athlete in 2018 was not LeBron James or Conor McGregor, but actually…Tristan Thompson pic.twitter.com/UVN8C4vGU2

Data from Google reveals that searches featuring Thompson spiked in the week of April 8 to 14. This was when news broke out that the 27-year-old allegedly cheated on his wife — television personality, socialite, model, businesswoman, Khloe Kardashian.

It is surprising that James is nowhere to be found in the list. The only basketball player is Kawhi Leonard of the Toronto Raptors, whose name spiked in the week of July 1 to 7. This was around the time when Leonard demanded a trade from his former team, the San Antonio Spurs.

Were you surprised that Tristan Thompson took the crown? Will he take the top spot again next year? 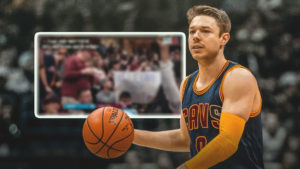