The Cleveland Cavaliers have some important decisions to make regarding their players next season. One of those decisions is whether the Cavs should bring back big man Tristan Thompson, who is an unrestricted free agent.

“I think it’s fair to say there’s mutual interest for sure,” general manager Koby Altman said about the possibility of re-signing Thompson. “He’s been with this franchise his entire career since we drafted him. He’s won a championship here. Obviously, he means a lot to the players on the team right now, but it has to make sense. There are some events coming up — the draft, free agency — where we have to see if it makes sense for him. He’s earned the right to be an unrestricted free agent and explore opportunities at this point in his career. So, we’ll see.”

This mutual interest comes despite the addition of center Andre Drummond, who was acquired in a trade with the Detroit Pistons in February.

For now, Thompson is not with his Cavs teammates, who have started a bubble that will allow their players to workout ahead of next season. It is clear, however, that his teammates want him back, with Kevin Love being one of the most vocal:

“He’s a guy that’s had a few nagging injuries, but for the most part incredibly durable, you know what you’re going to get,” Love said in a meeting with reporters. “He lets his effort and that motor do so much. He’s just so valuable for this team and this organization. I really hope that he’s back.”

The 29-year-old Thompson was drafted by the Cavs in the 2011 NBA Draft and has spent his entire career with Cleveland. This season, Thompson averaged 12.0 points on 51.2% shooting to go along with 10.1 rebounds and 2.1 assists in 57 games. 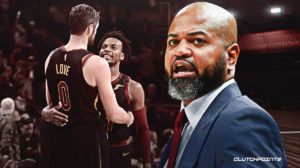